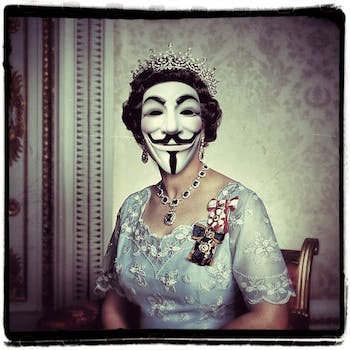 The hacker teen queen of Anonymous pleads guilty in London

If Ryan Ackroyd were really a 16-year-old girl, he'd probably be facing less time in prison.

Who is Kayla? According to hacker legend, she’s a 16-year-old member of Anonymous subgroup LulzSec and a heartthrob to geek boys on three continents. On Tuesday, in Southwark Central Court in London, she entered a guilty plea on one count of “conspiring to do an unauthorized act to impair the operation of a computer or computers.”

The Anonymous Solidarity Network responded with the tweet “We do not forget Ryan Ackroyd aka Kayla #FreeKayla” and a video proclaiming “Free Incarcerated Anons.”

Ackroyd’s teenage persona is typical of LulzSec, who always claimed to be in it for the laughs. Kayla was a drama-enhanced persona designed to gain the maximum number of fanboys in the shortest time. An empowered cyberpunk female teen hacker would out-draw pretty much anyone except a risen Steve Jobs in that kind of competition. Particularly after the audacious and much-publicized Gawker hack, Kayla’s appeal was a central part of the cultural impact of LulzSec. Say what you will about their exploits, they certainly understood marketing.

If Ackroyd had really been a 16-year-old girl, he’d probably be facing less time in prison. As it is, he’s lucky to be British. Fellow Brit LulzSec members Topiary, a.k.a. Jake Davis, and tflow, a.k.a. Mustafa al-Bassam, were both under 20 when arrested, and have been given far greater freedom than their U.S. counterpart in LulzSec, Jeremy Hammond, or their U.K. colleague Ryan Cleary.

Davis was even able to contact Barrett Brown, commonly described as the public face of Anonymous, via Tinychat. Hammond is still awaiting trial, and has been in custody without bail for over a year. Sabu, generally acknowledged to be the ringmaster and chief polemicist, was working for the FBI and has had his sentencing on numerous crimes, both LulzSec and otherwise, pushed back twice.

Ackroyd, Davis, al-Bassam, and Ryan Cleary will be sentenced next month. While Ackroyd pled on one charge, the government has tabled a number of others relating to multiple DDoS attacks, reserving the right to proceed with the charges if it sees fit. It’s an effective way of ensuring compliance with terms of release.

Those attacks were against, among others, the Westboro Baptist Church, SOCA (the U.K. equivalent of the FBI), Sony, and the CIA. Until the sentencing, Ackroyd and Davis are out on bail, under restrictions that include neither accessing the Internet nor getting someone else to do it for them.