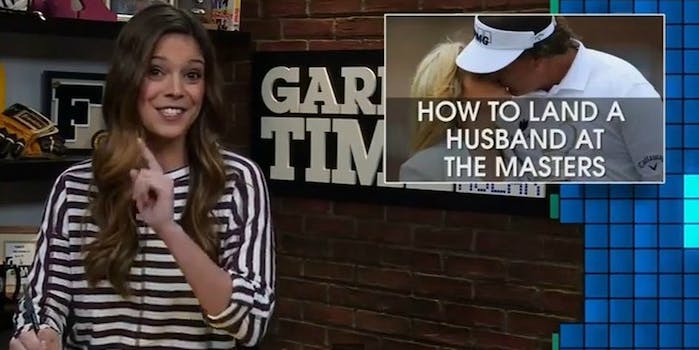 If you don't know Katie Nolan, she's outstanding on these topics. Especially if it comes at the price of her employer.

Say this for Fox Sports’ Katie Nolan. She is not afraid to criticize the company that pays her salary.

We saw that last September when she said, “The truth is, the NFL will never respect women and their opinions as long as the media it answers to doesn’t. I’m ready when you are, Fox.”

On Monday, Nolan was at it again—this time, she took on FoxSports.com for publishing an article titled “How to Land a Husband at the Masters.” Although FoxSports.com’s Clay Travis, who runs the website Outkick The Coverage (which is under the Fox umbrella), told Nolan that the article, written by Rebecca Johnson, was supposed to be lighthearted, Nolan certainly didn’t take it that way.

And Nolan—who’s quickly become well-known for these sarcastically humorous, yet incisive outbursts on her new show, Garbage Time—went on a 4-minute rant of jokes and sharp points. Take a look.

My personal favorite quote: “Not every women goes to sports events to find a husband. But two to 3 percent that do, and they deserve to have articles geared to their interests on sports websites they’ll never visit, just in case they end up there by accident,” Nolan said. “It is very easy to try type ‘Cosmopolitan.com’ and accidentally type ‘FoxSports.com’ if you’ve just got your nails done.”

And of course, the kicker of the piece, which I won’t spoil for you here, is gastrointestinally fantastic (and also sort of disgusting and something that probably wouldn’t be included in any “How to Land a Husband” articles).

My take: The article in question was silly. Nolan’s response was silly, as well. But also a hundred times more awesome.