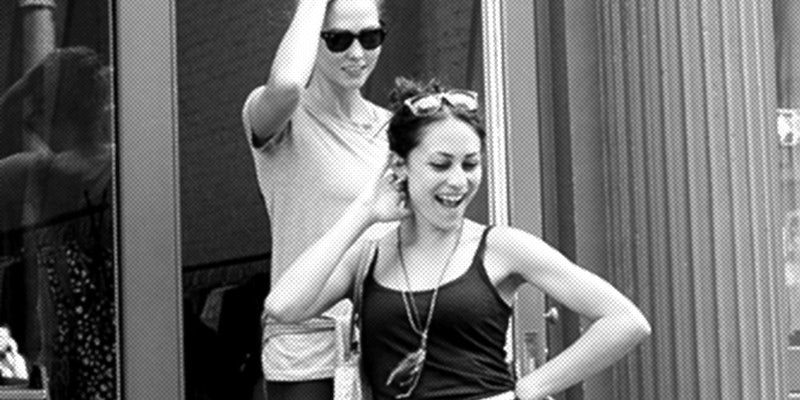 No, Kara Dudley didn’t assume the cameras were for her. She was engaged in a far more noble pursuit: stalking Taylor Swift.

If you are the type of the person who runs errands clad in mismatched sweatpants and old sorority formal T-shirts, bad news: A girl you’ve never heard of just ruined that for you.

In an act of preparedness that would make even boy scouts weep, 22-year-old New Yorker Kara Dudley mugged for a gaggle of paparazzi while shopping in SoHo yesterday. The only problem? They were actually trying to get a shot of Taylor Swift’s BFF, Victoria’s Secret model Karlie Kloss, who was exiting the store behind her.

That time when you think are you being papped and SUPERMODEL Karlie Kloss is behind you… https://t.co/hY0dyxyJ5T pic.twitter.com/I7VvOG2pyo

The awkward moment when you think you’ve been papped but there’s a supermodel behind you UGH https://t.co/5StWn754N3 pic.twitter.com/f4pyJznCNr

After Good Morning America reported on Karlie Kloss and the then-unknown girl who thought the paparazzi wanted a photo of her, we knew we had to track down this mystery woman with the balls of brass to find out not only what actually happened, but also how Dudley manages to lives in a post–Taylor Swift world without knowing who Kloss is, and how she took such a great solo photo without any advance notice. (Some of us still take upward of 36 photos before giving up entirely.)

To set the record straight: No matter what GMA tries to tell you, Dudley didn’t assume the cameras were for her. Instead, she was engaged in a far more noble pursuit: stalking Taylor Swift.

Dudley saw the paparazzi, heard Swift was inside and ducked in to try to catch a glimpse of her—not realizing that the other blonde in the store was Kloss. When Swift left, Dudley left shortly after, and when the flashbulbs started going off, she did what any actress does best: She posed for the camera.

According to Dudley, “I didn’t even know [Karlie] was there until I saw the pictures the next day. I just thought it was cool that I saw Taylor Swift, so I went home and told all my friends about it. Little did I know there was actually a whole other story going on behind me. The next day a friend texted me a photo of myself photobombing Karlie Kloss. I was just dying of laughter for the rest of the day.”

And thus proves the No. 1 thing I have known to be true: If it wasn’t for Taylor Swift, no one would know who Karlie Kloss is.