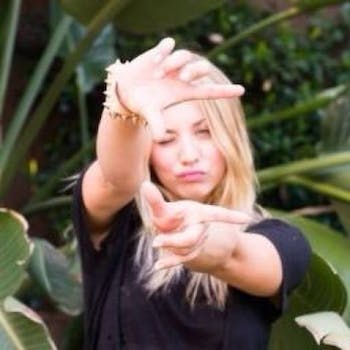 Apparently, Kaley Cuoco, an actress in the allegedly hilarious CBS situation comedy, The Big Bang Theory, posted a paid tweet endorsing Dish’s “Hopper” DVR product to her Twitter account yesterday, which has over a million followers.

According to a petulant press release issued by Dish, CBS “demanded” she remove it.

This, according to Dish, constituted a “war on progress” by CBS.

After The Wrap broke the story (for varying values of “story”) on the tweet, it was deleted. CBS denies demanding its removal.

Spoiler Alert: CBS, along with most traditional broadcast companies, is not an early adopter of technology that allows viewers to sidestep advertising, traditional TV’s bread and butter. The company is currently in the midst of a lawsuit with Dish, alleging the Hopper, which allows the watching of television shows, including The Big Bang Theory (cue: laugh track!), without enduring the commercials, is illegal. CBS, and other broadcast networks who have also sued, maintain Dish is violating copyright.

This isn’t the first time CBS has evinced displeasure over Dish in the context of an employee. Dish’s Hopper with Sling had been voted “Best of Show” at this year’s Consumer Electronics Show by CNET, who handled the award. But CBS, which owns CNET, vetoed the decision, instructing CNET to remove the product from consideration due to the lawsuit.

The Consumer Electronics Association, who runs the show, subsequently ended CNET’s relationship with the awards.

A star, who’s getting her nest feathered by a cigar-chomping cartoon blowhard, turned around and took money from another old moneybags. Neither of these background characters from a W.D. Howells novel gives a rat’s ass about you and neither does the gum-cracking gold digger they’re fighting over and whom neither cares about except as a way to keep score.

It’s like Ted Turner and Donald Trump calling each other jerks, while Kim Kardashian eggs them on.