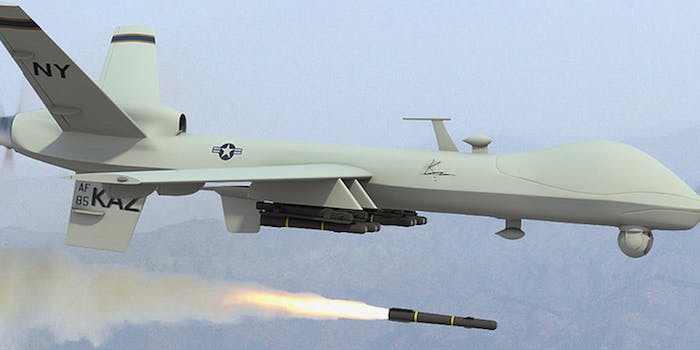 Memo to be released as author faces tough confirmation vote in the Senate.

Relenting to a court of appeals ruling and mounting political pressure, the Obama administration will release the classified memo that lays out the legal justification for using unmanned aerial drones to kill U.S. citizens abroad.

The decision to disclose the memo rather than fight a court ruling ordering its release comes as the Senate prepares to vote on whether or not the memo’s author should be allowed to sit on the federal bench.

The Associated Press sites two unnamed administration officials, who say the Justice Department does not plan to appeal a recent ruling by the 2nd U.S. Circuit Court of Appeals in New York that requires the memo’s disclosure under Freedom of Information Act guidelines. Until recently, the administration had fought to keep the document classified, but according to the unnamed officials, both Solicitor General Donald Verrilli Jr. and Attorney General Eric Holder now support the document’s release.

The administration’s decision comes as the Senate is set to vote on the confirmation of President Barack Obama’s nominee to fill a vacancy on the 1st U.S. Circuit Court of Appeals in Boston. David Barron is a Harvard professor and former Justice Department official who faces stiff resistance from some senators for creating the legal framework by which the United States can use drones to kill citizens living overseas who are suspected of terrorist activity. The Senate is set to take a procedural vote on Barron’s nomination Wednesday, clearing the way for a final confirmation vote Thursday.

Republican Rand Paul of Kentucky and other senators have vowed to do everything in their power to block Barron’s nomination because of the memos. Even some members from the president’s own party have called for the memo’s release prior to a final vote.

Partially fulfilling these senators’ wish, the memo will be released, but doing so won’t happen quickly. DOJ officials must first redact parts of the document, and their edits will have to be reviewed by the court. The DOJ will also redact parts of the court ruling ordering the release.

Due to this security procedure, the memo will not be available before senators vote on Thursday. However, Senate Majority Leader Harry Reid (D-Nev.) said he’s confident that he has enough votes to approve the president’s nominee.

Controversy over the drone memo began back in 2011, when a U.S. military drone strike was used to kill Anwar al-Awlaki, an American-born al-Qaida leader living in Yemen. That same drone strike also killed al-Qaida propagandist Samir Khan, another U.S. citizen.

The U.S. has relied heavily on drone strikes in its ongoing efforts to eradicate threats of terrorism, but the practice has been heavily criticized by human rights advocates for, among other things, inflicting deadly collateral damage on civilians.

For drone opponents, the execution of al-Awlaki and other U.S. citizens without due process is a bridge too far. They questioned the legality of such tactics and the administration has only spoken of Barron’s memo as justification without actually revealing its text.

The American Civil Liberties Union (ACLU) and reporters for the New York Times filed FOIA lawsuits against the DOJ, which was initially struck down by a U.S. District Court judge in 2013. These parties won on appeal last month.

The ACLU is calling on senators to hold off on Barron’s confirmation until the documents have actually been released. Meanwhile, Paul says he is unswayed by the ruling.

“I rise today to say that there is no legal precedent for killing American citizens not directly involved in combat and that any nominee who rubber stamps and grants such power to a president is not worthy of being placed one step away from the Supreme Court,” Paul said from the Senate floor.

But according to the AP, the administration’s decision to release the memo has won over at least one vote: Sen. Mark Udall (D-Colo.), who initially opposed Barron’s confirmation now says he’ll vote in favor of the judicial nominee.