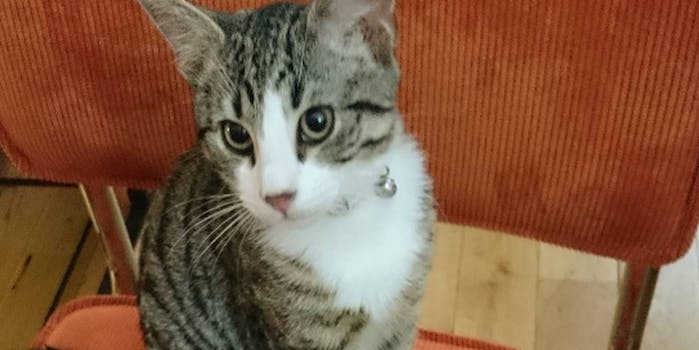 Julian Assange’s cat is prim, proper, and all grown up

The once-playful kitten is sporting a new, more serious look.

The day after he was finally questioned by Swedish authorities on charges of sexual assault, Wikileaks founder Julian Assange failed to make an appearance on Tuesday—but his cat showed up in his window and wowed reporters with its striking, yet business-oriented fashion sense.

Assange, who has been living in the Ecuadorian Embassy in London since 2012, was given the kitten by his children back in May. Living in such intense political turmoil makes a young cat grow up quickly apparently. It’s hard to believe the chill kitten from only a few months ago…

'Small curs are not regarded when they grin; But great men tremble when the lion roars' @DiploMog pic.twitter.com/MxLgvZllE1

…has become the melancholy business cat of today.

Cat looking out of a window at the Ecuador Embassy. #Assange #Wikileaks pic.twitter.com/tb4K5s7r2m

The feline, known as “Embassy Cat” on Twitter and Instagram, is probably just bored, as its owner is too busy being interrogated to play with it.

Assange’s fate is a hazy one. Although a United Nations panel found the he was being “arbitrarily detained,” if he were to leave the embassy he could still be arrested and extradited to Sweden; and possibly the United States, where he could face trial for treason.

The cat will most likely be fine.