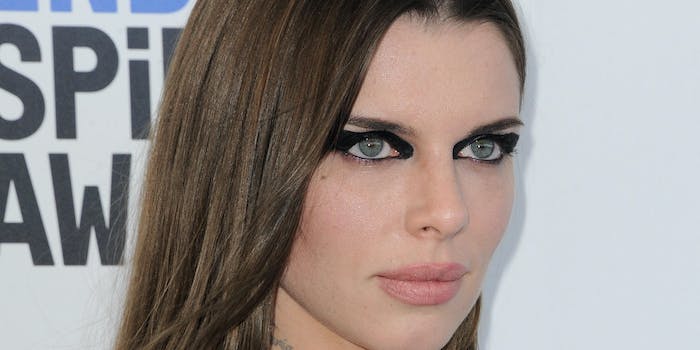 Patrick Star was a popular choice.

Julia Fox is no stranger to her outfits getting the meme treatment, but a recent look elevated them to another level.

Over the weekend, Fox was photographed in New York wearing a slip dress laced up on the sides with a pair of black platform boots. When Fox posted the photos on Instagram, she wrote, “I 💔 NY.”

The photos, which show Fox walking down the sidewalk and crossing the street, are pretty innocuous on their own. She poses in several photos, shows off the purse in her hand, and accounts tagged in the post include the designer behind her dress.

As Fox began to trend on Twitter, the conversation around Fox, her celebrity, her fashion choices, and her platform boots took over.

Some people drew comparisons to a similar pair of platform boots Lady Gaga once wore while walking through the city.

But what became even popular was making comparisons to who else Fox was emulating with her look—of the fictional variety.

Patrick Star, who briefly wears fishnet stockings and heeled boots as he pulls off some dance moves in the SpongeBob SquarePants Movie, proved to be a popular choice.

People also brought up HIM from Powerpuff Girls and artwork that’s part of a years-old meme.

Even an old photo of Bryan Cranston in costume as Walter White came up.

Each of those figures is attempting to walk across a tightrope of fashion, and at a glance, it shouldn’t work. But whether or not you think those looks are successful, it’s a daring move all the same.