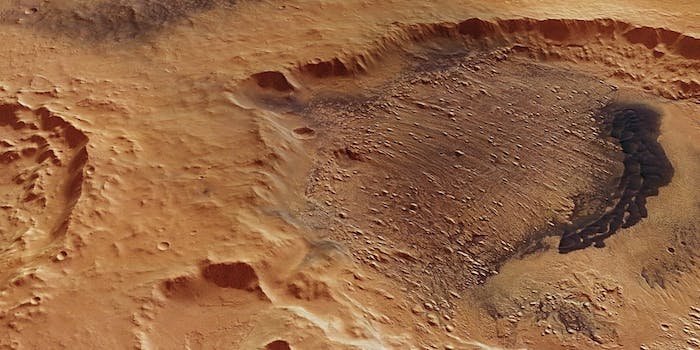 Jose Canseco wants to nuke Mars so we can live there

Jose Canseco isn’t just a former superstar baseball player who gets pulled over by the cops with goats in his car or pretends to blow off body parts. He’s also the guy who will corner you on social media to share his theory about the best way to terraform Mars.

Prompted by, well, nothing as far as we can tell, Canseco took to Twitter on Thursday night to share his idea for turning Mars into a habitable planet, also known as terraforming. And though it got strange, Canseco has clearly put some thought into this.

By my calculations if we nuked the polar ice caps on Mars we would make an ocean of 36 feet deep across the whole planet.

Yes i DID think about the missing magnetic field. It is created when the Triton collision liquidates Mars outer core into molten iron.

Perhaps Elon Musk would agree with some of these conclusions. A few months ago, the SpaceX CEO discussed his proposal to detonate thermonuclear weapons above Mars, creating two artificial suns over its poles to quickly heat it up and make it livable for us Earthlings.

As for Canseco’s ideas, Inverse took a deep dive to figure out if any of it was feasible.

As for the 36-foot Mars water world, the website wrote, “The current best estimate is that there are 150 billion cubic meters of ice on Mars, enough to form a meter-deep ocean. So, at best, we’re making a planetary kiddie pool. Let’s be charitable and say Canseco meant to type ‘3,’ not ’36’ (metric is kinda tricky after all). Proceed.”

As far as energy is concerned, Inverse said that, in order to raise the water’s temperature to at least 32 degrees from the average Martian air temperature of -67—thus ensuring that the ocean was in liquid form—we would need at least 260 bombs as powerful as the Soviet Union’s 57-megaton Tsar Bomba, the largest nuclear weapon ever built.

“Of course, this ignores the likelihood the ice is colder than laid out here, that the explosions wouldn’t transfer energy equally to the ice cap, and that we don’t have a couple hundred Soviet monster bombs just laying about. The biggest U.S. nuke, the B83, has a yield of 1.2 megatons, which means that if Jose is running a U.S. mission he’d need to launch something like 12,000 interstellar B83 warheads. We only have about 7,000 warheads, and not all are B83s.”

As for how humans could pull off Canseco’s plan to redirect Triton, Motherboard talked to an astrobiologist and discovered that, well, no.

The astrobiologist who did get back to me didn’t want to be quoted by name because it’s so insane, but told me that the idea of “moving Triton” is totally nuts—and oh, by the way, Triton is a moon of Neptune, not of Saturn. Moving a moon is not something that’s easily done, especially when the vague plan is to have the giant celestial body traverse the orbits of Uranus, Jupiter, Saturn, and the whole of the asteroid belt before ultimately having it crash into a planet.

We’re just going to assume that Canseco has a plan to make this happen as casually as he tweeted it into the universe.

Needless to say, Canseco’s entire plan probably isn’t happening anytime soon. But it’s cool. As Canseco has said in the past, we’re not far from everlasting life.