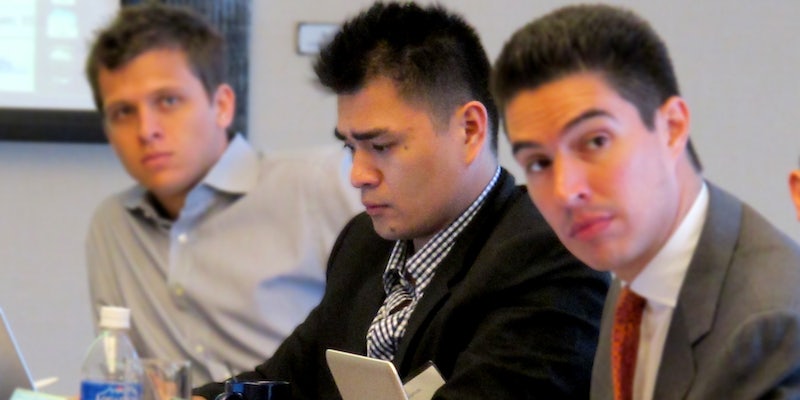 Jose Antonio Vargas detained by Border Patrol—just like he predicted

Vargas had traveled there to help raise awareness for the Honduran refugee children detained at the border this month.

Vargas had traveled there to help raise awareness for the Honduran refugee children detained at the border this month. In 2011, Vargas outed himself as an undocumented Filipino immigrant in a New York Times op-ed.

Ryan Grim of the Huffington Post first tweeted a photo of the detainment. The news was confirmed by Define American, the Vargas-funded immigration-reform nonprofit.

Photo of @joseiswriting in handcuffs in McAllen after being detained by Border Patrol (via @ryangrim) pic.twitter.com/PKnIkJpZhW

“It became apparent during our time here, in this border town, that the founder of our organization, Jose Antonio Vargas may not be able to leave McAllen — a situation shared by thousands of undocumented Americans who are “stuck” at the border, which for them is a daily struggle.

“This morning, Mr. Vargas attempted to board a plane to Los Angeles where we are scheduled to screen our film ‘Documented.’ Mr. Vargas did not make it through security at the airport. Our understanding is that he is currently being questioned by border patrol.”

Vargas was aware of the Border Patrol checkpoints on highways and at the airport, having reported for Politico about the risks. Vargas also live-tweeted his imminent date with these checkpoints Tuesday morning, pointing out that he has a valid passport from the Philippines but no United States visa.

About to go thru security at McAllen Airport. I don’t know what’s going to happen. For updates follow @DefineAmerican & @MAC_UTPA

The only IDs I have for security: Philippine passport and my pocketbook US Constitution @DefineAmerican & @MAC_UTPA pic.twitter.com/IFH0Vb4oX7

Define American tweeted that Vargas was taken to the McAllen Border Patrol station.

A social media campaign has since been launched and supported publicly by outlets like phone carrier Credo Mobile, as well as MSNBC and Univision correspondents.

We condemn human rights abuses around the world, but fail to see what goes on in our own backyard. Journalists in handcuffs #IStandWithJose

Update: Vargas was released from custody later on Tuesday, reports the New York Times, thanks in part to his lack of criminal record. “I was released today because I am a low priority and not considered a threat,” Vargas reportedly said by phone. “I would argue that the 11 million undocumented immigrants in this country are not a threat either.” The author will appear before an immigration judge.