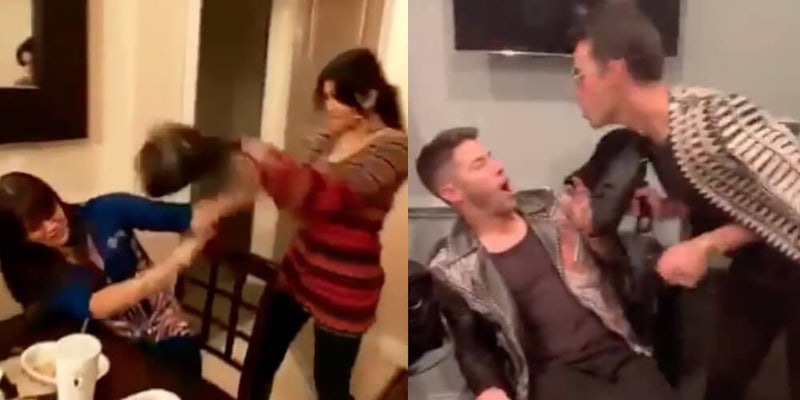 Some of the Kardashians have reacted to the recreation.

The Jonas Brothers reminded everyone of a long-forgotten Kardashian throwdown this week by recreating it on TikTok.

The year was 2008. Quaint times, in retrospect. The E! network was airing the second season of a little show called Keeping Up with the Kardashians, which had effectively introduced America to the offspring and ex-wife of the dude who helped get O.J. Simpson off of double homicide charges. The Kardashian sisters—Kim, Kourtney, and Khloé—were ostensibly still getting accustomed to their newfound fame, which is perhaps why a fight between the girls broke out in the aptly-titled season 2 episode, “Kardashian Civil War.”

In the episode, Kim purchases her first Bentley, to the ire of her sisters Kourtney and Khloé, for some reason.

“Don’t be fucking rude,” Kim says, storming into the room and swatting Khloé with her purse. “Are you kidding me? Stop! What are you doing,” yelps Khloe, who attempts to grab the improvised weapon. “I swear to god, I’ll fucking hurt you,” snaps Kim, punching her sister in her arm grasping the bag. “Don’t do that … you fucking bitch.”

On Monday, Nick, Joe, and Kevin Jonas of the Jonas Brothers recreated the fight in a clip uploaded to TikTok. “Don’t be rude!” the bros captioned the video, which they also shared on Twitter.

In the reenactment, Joe plays the part of Kim Kardashian, who flounces into a room with a jacket over his shoulders. “Don’t be fucking rude!” he lip syncs to the dubbed-over dialogue, smacking his brother who is decked out in a bedazzled fringe leather jacket.

At the end of the video, Kevin quickly saunters by in the foreground with a perfect WorldStarHipHop reaction.

Not surprisingly, fans were quickly won over by the clip. “Reason 1047290193 why I Stan so hard,” wrote one Twitter user, while another added, “Actually love this [not gonna lie].”

And for anyone who thought maybe the Kardashians would object to a decade-plus old clip of them literally committing physical acts of violence against one another—well, you’ve severely underestimated the sisters’ fondness for attention.

Both Kim and Khloé shared the Jonas Brothers’ tweet, along with their resounding approval. “OMGGGG I love you guys,” Kim tweeted.

Even KUWTK executive producer Ryan Seacrest weighed in, quipping: “This week on…. Keeping Up With the Jonas Brothers.”

This week on….
Keeping Up With the Jonas Brothers https://t.co/fiSCGDkMdf

The following day, the Jonas Brothers teased a clip of their single along with a new video dropping later this week for “What a Man Gotta Do.” While they didn’t necessarily need the additional hype, it certainly couldn’t hurt.