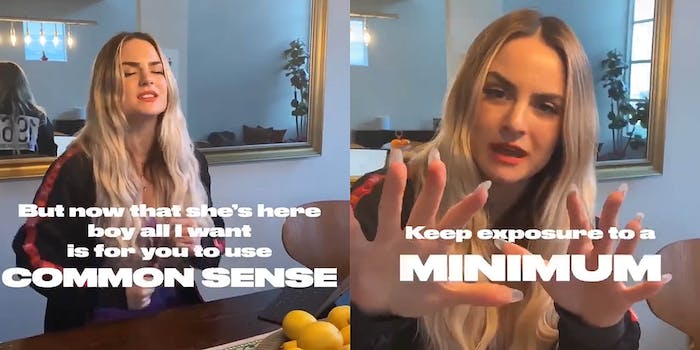 JoJo updates ‘Leave (Get Out)’ for the current pandemic

Please take it from JoJo and 'stay in, right now.'

JoJo is perhaps best known for her iconic 2004 single “Leave (Get Out),” but she has repurposed it for the current pandemic, in an effort to get people to “Chill (Stay In).”

The singer, who is about to release and (possibly?) tour behind new album Good to Know, posted the song on TikTok, adding new lines about coronavirus and quarantine. “I know you’re bored and want to fuck around,” she sings. “But not on me.” Later, she advises, “Keep exposure to a minimum.”

JoJo has also been offering support to those dealing with anxiety right now, and shouting out petitions for rent freezes.

JoJo, who was just 13 when “Leave (Get Out)” was released, has also been more open about years of label troubles that kept her from releasing new music, how she was put on a 500-calorie-a-day diet when she was 18, and her struggles with addiction. Thankfully, we have her back in the mix for self-quarantine support and guidance.