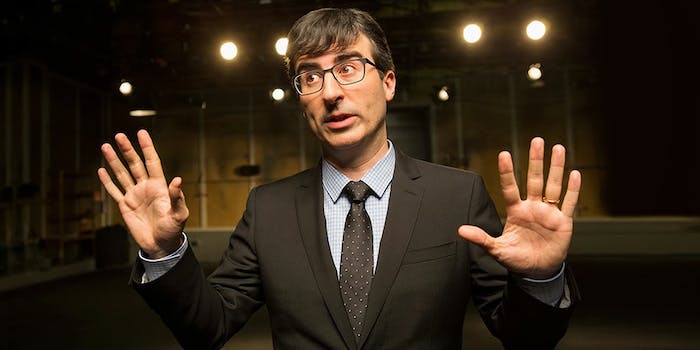 This is the news show we've been waiting for.

The Hollywood Reporter recently announced that John Oliver’s smash hit Last Week Tonight has already marginally surpassed the long-running Real Time with Bill Maher in ratings. It may be too soon to call it, but having been a fan of political satire/commentary shows like The Daily Show and The Colbert Report, I do find that Last Week Tonight provides a refreshing change from the now standard format of the satirical commentary show. The content and digital strategies that drive Last Week Tonight set it apart from other late-night news and commentary shows and explain its success among viewers.

Oliver’s show is delivered on a range of platforms, like HBO Go, YouTube, and traditional television broadcasting. As of this piece, Last Week Tonight’s YouTube channel had just over 840,000 subscribers and well over 100 million viewers since its creation in March 2014. To contrast, Real Time with Bill Maher’s YouTube subscriber base and total channel views are much smaller: 139,000 and just under 27 million views respectively since January 2006.

While Real Time has a wide social media outreach which includes Facebook, Twitter, Google+, and a blog, Last Week Tonight’s social media presence is presently limited to YouTube and Twitter. Thus, the digital presence of Last Week Tonight alone cannot explain why Oliver, an old name with a new show, has surpassed the well-worn and tested Real Time.

However, Oliver embraces his digital presence in ways that contrast markedly with Maher. This contrast might help explain why Last Week Tonight topped Real Time in the ratings. While Maher has “Overtime,” where viewers can tweet questions to his panel, the format is not used to maximum effect. Maher’s use of Twitter includes producers who filter appropriate questions or comments before they reach the show, which makes “Overtime” a somewhat dated use of Twitter. This is merely a regulated form of participation that replicates what happens in the public sphere already.

Oliver has devoted space and energy to responding to YouTube users. It’s similar to Jimmy Kimmel’s “Celebrities Read Mean Tweets,” but in ways that hold the long-felt frustration with YouTube as liberatory public sphere open to scrutiny and criticism. By responding to YouTube critics on his show, Oliver has challenged what we already know about public discussion forums: They aren’t necessarily the types of democratic spaces where knowing individuals gather and engage in a free exchange of ideas. Whereas Real Time gestures at participation, Oliver engages the public space of YouTube with the force of an intelligent and informed citizen.

Though limited in its use of social media, Last Week Tonight further provides a quality of content within the social media outlets it engages. In so doing, it challenges the perception that total social media saturation is the best digital strategy.

That Oliver devotes so much time to a single issue on each episode is also important, as The Daily Show’s borrowing of the nightly news format does not allow for the type of extensive questioning and reporting that Oliver’s longer 15-minute segments do. On Real Time, where panelists frequently discuss a single topic for 30 minutes, there is often a lack of substantive discussion. Guests are usually trying to communicate talking points rather than hold a serious conversation.

Real Time’s discussion format is illustrative of the types of public engagement that many folks express frustration with: Opposing viewpoints clash without any sense or semblance of transformation. The result is that those of us listening as well as those who participate in the conversations on Real Time are rarely, if ever, transformed in meaningful ways by what we hear. Real Time does not invite audiences or guests to change. There is little demonstration of listening on Real Time.

If Real Time is a reflection of the problems with the public sphere, Last Week Tonight offers a necessary solution. Terrance Ross of The Atlantic is mostly correct when he writes that “the Last Week Tonight team has found a way to take a seemingly complicated issue, remove the talking points and cultural baggage surrounding it, break it into understandable parts—and then slowly rebuild it.” I disagree slightly with Ross’s suggestion that Oliver strips his content of cultural baggage. By working within the boundaries United States culture, Oliver cannot escape its influence.

However, Ross is getting at the fact that on many of these “fake” news shows, guests are perceived as uninformed at worst and limitedly informed at best. That is, they know their side extremely well and present no indication of openness to alternative perspectives. If that is the case, then I would agree that, like Stewart, Oliver and his team have delivered the informed criticism that is often lacking in digital and television outlets. With humor and knowledge and a deep commitment to social justice, Oliver and his team are making being smart sexy.

Last Week Tonight is unapologetically interested in social justice and relevant issues, and it uses a format like The Daily Show’s, with important improvements. Like The Daily Show, Oliver uses videos to show the hypocrisy or idiocy of the official talking points of those in power. However, Oliver speaks with a clarity and criticism that is much more direct. Oliver’s Miss America segment offered a mix of feminist critique with a scathing attack on the organization’s attempt to rebrand itself as primarily concerned with scholarship, for example.

In the world of Last Week Tonight, there is such a thing as injustice. Oliver does not shy away from calling out racism, sexism, or homophobia, showing these acts as harmful and destructive. But rather than leaving us overwhelmed by the presence of such negativity and cynicism, Oliver and his team invite us to act, think, and feel differently. Rather than present information and leave actions, thoughts, or feelings up to the viewers to decide, as Fox News’s model unfortunately does, Last Week Tonight’s agenda is simple and clear: Do something about the injustice in the world.

Given the sorry state of public participation in the United States, where people often shout at each other rather than listen from a position of openness, what we need is not more avenues of participation; we need models of better use of these outlets. Last Week Tonight provides such a model. Clearly, given the show’s viewership success, it is a model we have been waiting for.