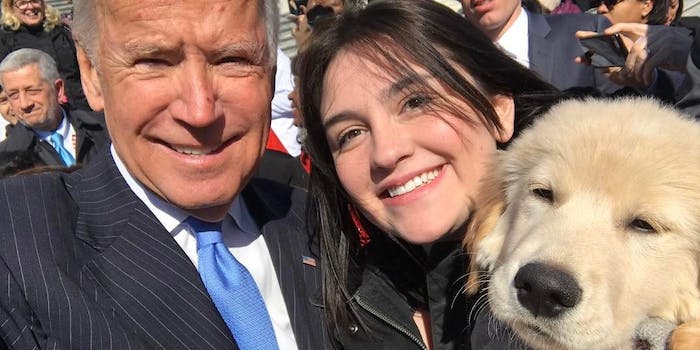 This is doggone adorable.

Puppies have captured our hearts for doing all sorts of things: going to weddings, working hard (or hardly working), even being hilariously bad at dog shows. (For National Puppy Day tomorrow, they will succeed in holding our attention for doing nothing more than merely existing.) But one lucky pup is making big waves for nuzzling noses with his namesake.

The two Bidens shared an adorable introduction in D.C. when the two-legged Biden returned to the Capitol for the anniversary of the Affordable Care Act. (More like Aww-fordable, amirite?)

You’ve gotta admit they’re pretty cute together. But can anything top the glorious duo of Obama and Biden? Now that they’ve left office, we suppose there’s room for another BFF in Biden’s life, but his new furry friend has big shoes to fill.

That said, this isn’t furry Biden’s first trip to Capitol Hill, either: The little pup has big ambitions for a 4-month-old.

In the unlikely event you didn’t immediately do so already, you can follow along with all of Biden’s adventures with his human Sydney over on his Instagram account, @BidentheGolden.