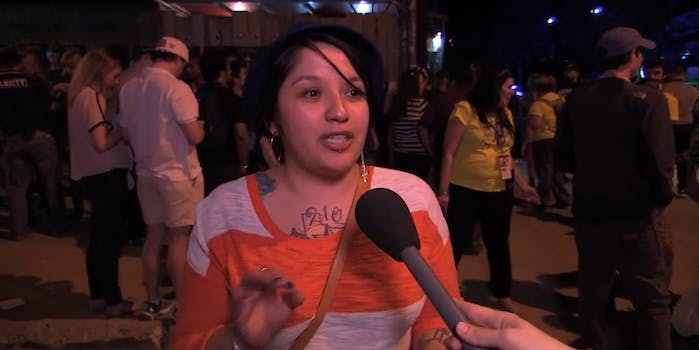 Will Neil Patrick Harassment creep their way into the hearts of fans everywhere?

Austin: city of music. And, apparently, city of pretentious hipsters who knew about that band before you did. Even the ones that don’t exist.

Just as they’ve done at other music fests like Coachella, Jimmy Kimmel sent his Lie Witness News team to the streets of Austin for SXSW‘s music festival. This brave camera crew faced the madding crowds, and their even more madding tech-nerd fashion to find these gems of music-lovers: The ones who love music so much they’re willing to roll with you when you start talking about music that doesn’t even exist.

Our favorite is Fan #2, who happily informs you at 1:15 that she thinks a band named What the Fuck, Bruce Jenner? is “right on point” with another band named Neil Patrick Harassment. Her enthusiasm is so great, we’re starting a crowdfund campaign for these two bands to go on tour together.

If a hipster pretends to be hip on the streets of Hipsterville, do we laugh or cry?