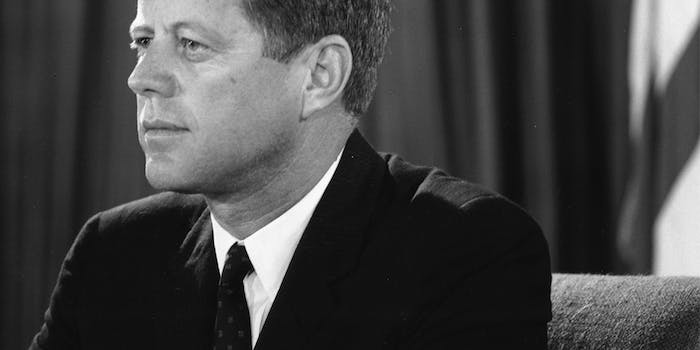 The John F. Kennedy Presidential Library and Museum in Boston has been tweeting JFK’s “thousand days in office,” culminating today.

The John F. Kennedy Presidential Library and Museum in Boston has been tweeting JFK’s “thousand days in office,” culminating today on the 50th anniversary of his assassination. The Twitter account @JFK_1963 will be recapping the events of Nov. 22, 1963, as they happened.

The account tweets excerpts from Kennedy’s speeches as well as links to primary-source documents.

Fifty years and 26 days ago, he spoke at Amherst College on the importance of the arts.

The account tweets headlines from New York Times articles to give historical context.

NYTIMES: The office of Gov. George C. Wallace announced the arrest of two persons “in connection with the Birmingham bombings.”

Some are more ominous than others.

NYTIMES: Soviet and U.S. clash in U.N. on Cuba

NYTIMES: US officials believe Soviet Union has removed from Cuba most, if not all, of long-range missiles that precipitated Cuban crisis.

Meets with advisers to discuss Laos and foreign aid.

Quieter moments amid the tumult:

Cruises aboard the Honey Fitz, with Prince Stanislaus Radziwill.

Days before his assassination, Kennedy gave a speech on the space race.

This Nation has tossed its cap over the wall of space, and we have no choice but to follow it.

Here’s the president’s itinerary for today. He is currently at breakfast with Mrs. Kennedy and the Fort Worth Chamber of Commerce.