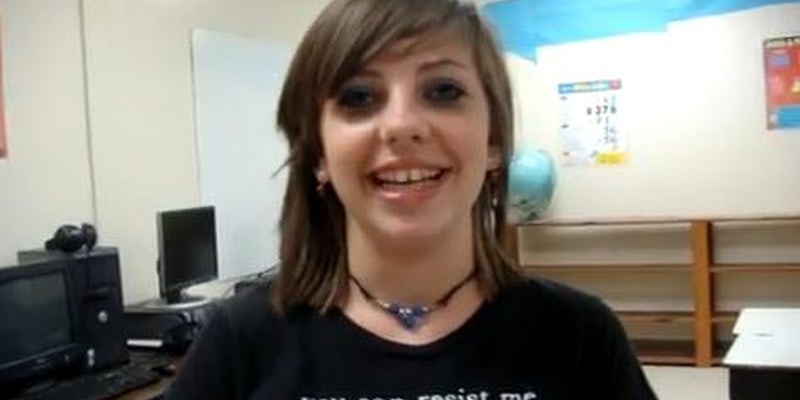 Did 4chan save Jessi Slaughter?

Infamous Internet pre-teen star Jessi Slaughter makes an apology video. Did the Internet damn her or save her?

“I’m truly sorry for everything I’ve done,” says a 12-year-old girl as she fidgets on camera. “I feel really bad about it now… I’m really sorry for accusing you of rape and everything.”

The girl is Jessica Leonhardt, aka Jessi Slaughter, the 2010 Internet celebrity known for her provocative videos, angry father, false accusation of rape against Blood on the Dance Floor’s lead singer — and for all the cyberbullying she’s endured.

Through the video we learn Slaughter has “no computer privileges because of foster care” and has been “locked up in mental institutions.”

Slaughter’s apology video is the latest chapter in a saga that pitted a very troubled tween with a camera, a horrible home life, and a big attitude against the often brutal forces of the anonymous Internet. While the taunting and threats Slaughter received over the Internet can only be described as “cyberbullying,” in the end the villains and heroes of Slaughter’s road to redemption are vaguely defined.

The Slaughter saga began in July 2010, when Slaughter’s video addressing her haters — mostly known for the words “If you can’t stop hating…I’ll pop a glock in your mouth and make a brain slushie”– caught the attention of rancorous online community and image board 4chan and rocketed her to Internet fame.

Before 4chan, Jessi was known in the Stickam community — a live streaming social network and video chat site — for her controversial posts and lewd photos.

In what Oh Internet, a site documenting online culture,  describes as an attempt “to alert her parents of their child’s extra-curricular activities,” 4chan engaged in multiple “raids” against the Slaughter family.

The end result spawned videos of Slaughter crying, two of which featured her raging father whose appearance created multiple memes himself. The anonymous “raids” increased in intensity; Slaughter and her family received death threats when Jessi was just 11.

Blood on the Dance Floor, a band Jessi loved but whose lead singer, Dahvie Vanity, she accused of rape, also singled her out — literally. In response to her accusations, the group used her as a muse.

Blood on the Dance Floor’s  “You Done Goofed” is a profanity-laced, harshly insulting ballad that has garnered its own share of controversy.

Slaughter’s plight caught the attention of mainstream media and she quickly became a poster child for parent groups fearful of the Internet.

Jessi Slaughter went on to be cited as the perfect example for  why parents should be involved in a child’s online activities, and she was referred to in countless pieces of cyberbullying literature.

Slaughter and her family even appeared on a Good Morning America segment that addressed both of these issues.

In the meantime, Slaughter’s home life was making the news. The Smoking Gun wrote about her father’s arrest for punching her in the mouth. She was subsequently moved into a foster home.

And Slaughter’s father, Gene Leonhardt, died of a heart attack the morning her apology video was uploaded on YouTube.

Did the Internet cause Slaughter’s pain and problems?

“I don’t fault the Internet for creating Jessi Slaughter,” said Caroline Knorr with Common Sense Media,  a media-education non profit. “I think it was a family in crisis, and it was a child acting out, using tools at her disposal.”

“It sounds like this girl was hurting even before this whole thing started,” added Courtney Macavinta, the cofounder of The Respect Institute, another nonprofit dedicated to helping girls.  “I’ve learned through all my work with teens and tweens online, that we all want to be seen and heard. That’s what I see in all her actions,” although she added, “They were negative and unhealthy.”

But there is an argument to be made that while the Internet’s response  was clearly mean-spirited, it may have actually saved her.

It is almost ironic that the “cyberbullies” saw and understood Slaughter’s videos for what they were when her parents could not.

In the Encyclopedia Dramatica entry on Jessi Slaughter, one of the documented Anonymous troll messages sent to Slaughter’s mother’s Facebook account is eerily poignant:

“Your daughter: Distributed nude photographs of herself. Went on a live cam chat and performed all sorts of sexual behaviors. Made threatening youtube videos towards people she didn’t like/who disagreed with her/said mean things about her…”

“This wasn’t cyber-bullying, this was a group of proactive individuals trying to smack a little sense into a kid who’s quite obviously getting zero discipline from you and your meth addicted husband… This is not a threat. This is a fair warning…”

“If Jessi does not have her internet access revoked, by you. Then I will be forced to compile as much evidence against you and your husband as necessary and will be contacting child protective services to the effect of having your daughter removed from your household.”

If 4chan had not attacked Slaughter as ruthlessly as it did, would the mainstream media have noticed her tear-soaked, desperate videos? Would she still have gotten the state care she needed? Would she still be living at home? If 4chan left Slaughter alone, would she have continued her profanity-laced and sexually charged videos, only to fall prey to a pedophile?

Looking at Slaughter’s apology video from last Thursday, it’s hard not to notice how relatively normal Slaughter comes off in the footage — compared with her tear-soaked earlier videos. YouTubers made the same observation, writing in the comments of her apology video that she “looks well” and “more mature.”

Today she appears happier, despite living in foster care.  Maybe 4chan, and the maliciousness of the Internet, did help her get there.