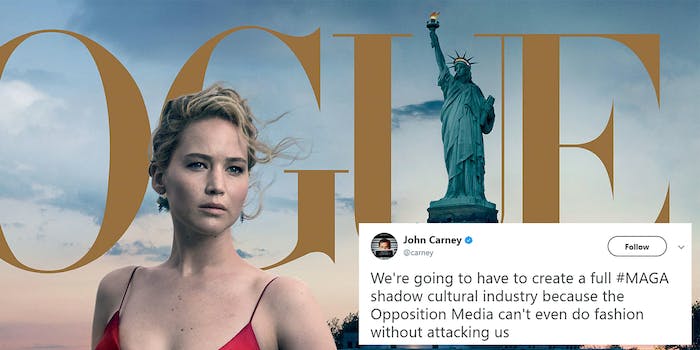 Another beautiful day in the land of the free!

The Statue of Liberty is a symbol of freedom for those entering, or already residing in, the United States. The statue, which depicts the Roman goddess Libertas holding a torch in one hand and a tablet that lists the date of the Declaration of Independence in the other, is one of the most popular tourist attractions in the country and a widely used symbol in pop culture. Does the statue represent one political party? In previous years, many people would say no, because the statue represents America as a whole. But now that we’re living in the alternate dimension known as 2017, anything goes.

On Wednesday, Vogue posted a series of photographs on Instagram promoting the September issue of the magazine. One of their September covers, photographed by Annie Leibovitz, shows the American actress Jennifer Lawrence casually leaning back on the railing of a boat, with the Statue of Liberty in the background. Usually, the heated arguments about fashion magazine covers revolve around extensive Photoshop jobs or the clothing and accessories used in the shoot. But John Carney, who leads Breitbart’s finance and economics coverage, decided that the use of the statue was an “attack” on those who support President Donald Trump.

“We’re going to have to create a full #MAGA shadow cultural industry because the Opposition Media can’t even do fashion without attacking us,” he tweeted with a link to the Vogue cover.

He suggested a new fashion section for Breitbart.

Lawrence isn’t a fan of Trump, but she told Vogue that she supports closing the political divide.

“We can’t continue this divide and anger. There are issues affecting us as human beings, not as liberals and not as Republicans. We have to protect the foundation of this country, and acceptance. If you’re preaching acceptance, accept immigrants, accept Muslims, accept everybody.”

The fact that Lawrence is supportive of immigration AND appears in a photo with the Statue of Liberty was apparently too much for Carney.

Many people on Twitter were confused with the uproar over the photo.

Confused 😐Vogue and Statue of Liberty are essential and part of American life https://t.co/nA59kP9yUs

So any imagery of the Statue of Liberty is an attack on the alt-right….? I mean, that's fine with me. Can we have the flag too? https://t.co/40atTHlleF

Please be advised, all photos of the Statue of Liberty must now be accompanied by a trigger warning, thank you https://t.co/iKD4cWSgwq

So the first instinct now in seeing an image of the Statue of Liberty is that conservatives are under attack? https://t.co/tst3ZnvBhj

If your "patriotism" has led you to the point where an image of THE STATUE OF LIBERTY feels like a personal attack, you have a problem. https://t.co/Te4FgMmF0u

So who can use a photo of the Statue of Liberty? (Anyone.) What does it mean if you take a photo of her? No one agrees!

Jennifer Lawrence with horses is my aesthetic pic.twitter.com/983m2ySOEO