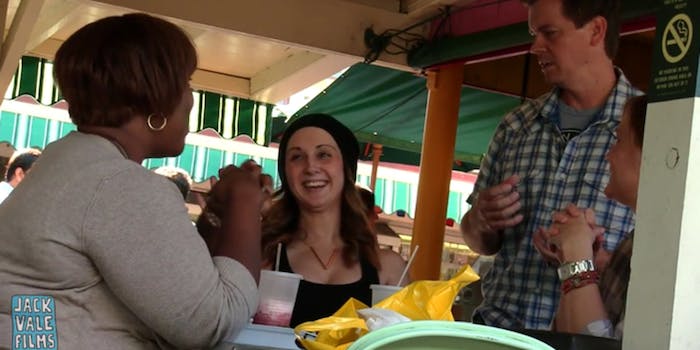 We’ve all creeped on strangers’ Instagram and Facebook photos. It’s part of our modern anthropological urge to virtually hunt and gather. YouTube prank star Jack Vale — perhaps best known for his hard-hitting series in which he farts in public — decided to turn this hobby into a “social experiment,” to see whether people would be freaked out.

In his latest clip, Vale searched people’s geotags on Instagram, Facebook, and Twitter in his immediate area, then took to the streets to find these people, based on where they said they were. He then proceeded to drop some personal details on them, like birthdays and nicknames for dogs.

“Let’s see what else I can find out from your Instagram,” he tells one woman who’s having lunch with friends, right before he reveals this is an “experiment.”

Most of the responses are good-natured, but one man walks off in a huff, saying he’ll call the cops if Vale “invades” his privacy again. That’s the part I would have liked to see: Can cops arrest someone for looking at public profiles and then feeding your own info back to you?

I think what we all really want to know is: Will there be a Farting in the Hood 3?