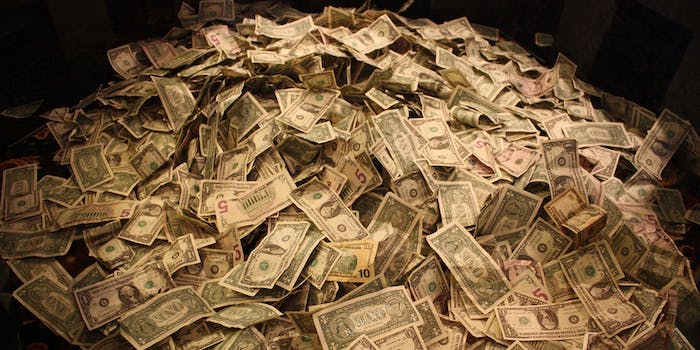 That doesn't mean you should try the same project 10 times.

Indiegogo is one of the most high-profile crowdfunding platforms in the world, but most project creators fall well short of their funding targets.

While there are a few projects that raise hundreds of thousands of dollars or more in funding, the vast majority of campaigns miss more modest goals, according to new research conducted by The Verge.

The analysis found just 9.3 percent of 142,301 finished projects (including a non-specific number of “test” campaigns) on the crowdfunding site met their fundraising targets. Many projects run a flexible funding campaign—meaning they receive any pledged funds even if they don’t meet the goal—but there’s a clear incentive to hit the benchmark.

Indiegogo carves out nine percent of funds for itself when a project fails to reach the mark. Otherwise, it takes four percent. Kickstarter, on the other hand, takes an all-or-nothing stance: if projects don’t meet the goal, no one gets a penny. If the project succeeds, Kickstarter keeps five percent.

Indiegogo has more projects because it allows a broader range of campaigns than Kickstarter, and is available in more countries. It lets people post projects immediately, allowing them to ask others to pay for a year of culinary school in Italy or for help in reopening a monastery. With a greater number of projects and a finite level of backer dollars, the economics alone ensure fewer Indiegogo projects will be fully funded.

Kickstarter, which sees more visitors to begin with than Indiegogo, is more stringent. It evaluates campaigns before they appear on the site and doesn’t permit non-creative projects (you can’t use it to start any old business or raise funds for a charity cause, for instance).

Many of the higher-profile crowdfunding projects over the past few years have appeared on Kickstarter, like the Veronica Mars movie (which raised $5.7 million of its $2 million goal), Zach Braff‘s next film, the Ouya games console, and the Pebble smartwatch, Kickstarter’s record-holder with $10.3 million in funding. The creators had sought $100,000.

Indiegogo has had its major success as well, like the Oatmeal’s attempt to open a Nikola Tesla museum and the more than $700,000 users raised for bullied bus monitor Karen Klein. It’s currently hosting an ambitious campaign to raise $32 million for a smartphone-computer hybrid. The Ubuntu Edge project has raised $8.4 million so far, but seems unlikely to hit its goal. As it is a fixed-goal project, it won’t receive any funds if it fails to reach $32 million in pledges.

The Verge’s research might help project creators figure out where they have the best chance of success. There are certain campaigns that have no chance of getting on Kickstarter, though those that do, and then fail, might look to Indiegogo as a backup—even if it means they have to settle for less money.

“As we explained to [The Verge] reporter in detail yesterday, her story is simply wrong. 1) The statistic she cites for her definition of success is incorrect, as she was told. 2) Additionally, she doesn’t seem to understand the whole point of Indiegogo having the flexible funding option, which allows Indiegogo customers to succeed at raising money without reaching any specific total.