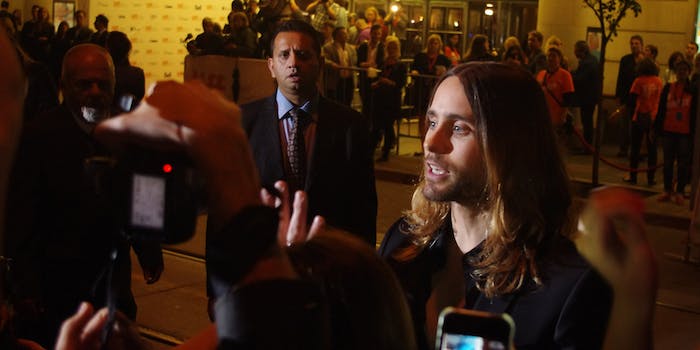 In defense of Jared Leto

Jared Leto has been widely criticized for his role in Dallas Buyers Club. Can important portrayals come from non-transgender actors?

Actor Jared Leto was kind enough to mention me in his 2014 Independent Spirit Awards acceptance speech (as part of a typically “Jared” list of people involved in the film alongside random notable people). But he really surprised me by thanking me in his acceptance speech as he won the Oscar for playing Rayon in Dallas Buyers Club.

My job was to sit down with him and answer lots of questions about what it’s like to be trans and to make a recording of me reading his lines from the script. From there, Jared did Jared’s thing: A brilliant, eccentric artist created his own portrayal of a movie character, which, in this case, happened to be some form of trans.

His follow-up speeches left something to be desired when it came to speaking well on the issues facing his character, especially against the backdrop of current politics and social movements. I suppose it’s doubly rare to be a gifted artist and a great political speaker. But personally, I thought Rayon seemed like a nice person and a real human being. I’ve known people like Rayon.

Anyone who’s followed my 11 years in Hollywood knows that I’ve always advocated for trans people to play trans roles. But I also refuse to shoot down powerful people who take steps to bring human trans portrayals to the screen, even if they are played by non-trans females (Felicity Huffman in Transamerica, Hilary Swank in Boys Don’t Cry) or a non-trans male (Lee Pace in Soldier’s Girl, Leto in Dallas Buyers Club). To all indications, Georges du Fresne was not a trans child when he played Ludovic in Ma Vie en Rose, but that incredible film continues to resonate with trans people and families of trans children. Good and important portrayals can come from non-trans actors.

Sorry if that is an inconvenient truth, but there you have it.

Sure, I’d love to get these roles as an actress with a history of transition, or see them go to other trans actors. (Heck, I’d love to play nontrans roles!) But I’m not so shortsighted that I’ll destroy allies and advocates—even less-than-perfect allies—if I think the overall contribution is beneficial. My beliefs in this area come from actual experience and familiarity with the film industry. Some small but vocal groups will disagree, and that’s just the nature of contentious issues. They can do their thing, and I’ll do mine, because in the end, there are many ways to contribute.

I caution others to remember, however, that the same logic that leaves zero room for a non-trans actor to try a trans role will be used to mandate that trans actors should not be able to play nontrans roles. And that would piss me off.

Leto’s portrayal of Rayon is not the rock upon which I’d make my last stand concerning this issue. His performance is more of an inspiration for this discussion. I advocate for positive portrayals and opportunities for trans people in the media. Some people are displeased that Rayon, in particular, is just another trans sex worker role, another trans addict, another “mystical adviser/comic relief.” And another role where the trans person is punished in the end. Those are indeed overrepresented portrayals, and there should be more balance—soon!

But I have known people like Rayon. She is not a made-up grab bag of random hateful attributes. She’s a portrayal of an uncomfortable segment of the trans experience that a few LGBT folks would rather be erased rather than discussed. I think many of the haters hate Rayon because she isn’t beautiful, she isn’t passable, she isn’t gender-binary, she isn’t 2014-political. And when I see that elitist hypocrisy, I’m inclined to push back.

It’s hard being trans, even more so in the era and circumstances of Dallas Buyers Club. I’ve known plenty of trans sex workers, self-medicators, wise teachers, hilarious weirdos, and people taken before their time due to violence and lack of health care. I’ve known trans people very much like Rayon, and maybe if some people got up from their remote activism devices (computer screens and smartphones) and left their ivory towers and privilege bubbles, they’d meet a few people like Rayon face-to-face too.

Then they could see that a human portrayal of this real segment of the trans community is a good thing, even if it’s by a non-trans person.

Please do hire trans actors for any role, especially trans roles. But please let’s not shoot ourselves in the foot by attacking allies willing to open the door for us as we approach equality.

This article was originally featured on The Advocate and reposted with permission. You can find the original here. Calpernia Addams is an out trans actress, musician and consultant.