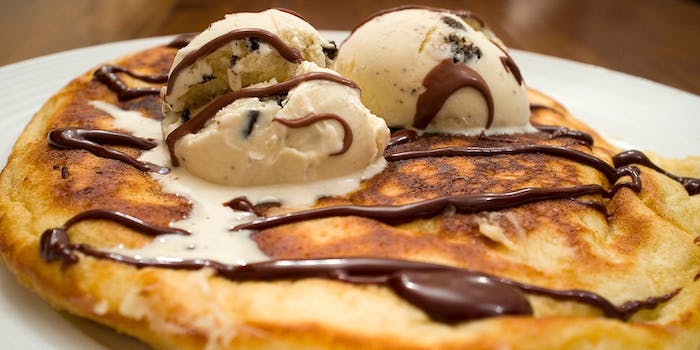 Betting a 13-year-old wrote this.

IHOP had to apologize Monday for tweeting a joke about pancakes that came directly from a seventh-grade boys’ locker room. Behold, the quip that unleashed an avalanche of bad PR for the breakfast chain:

As you can see, IHOP tried to make light of small breasts and oversized personalities, but for the life of me, I can’t figure out how that was supposed to be funny (as Trevor Noah could tell you, if you’re going to make an offensive joke, make sure that it’s hysterical, because otherwise all that fallout you’re sure to suffer will not have been worth it).

First of all, do we want flat pancakes? No, I prefer fluffiness. I don’t want a batter brick. I want some damn air in my breakfast. Second of all, the day I care about personality in my breakfast foods is the day I stop eating bacon.

The pancake tweet did not sit well in Twitter‘s gut.

.@IHOP I like my breakfast fertile, submissive to man's God-given authority, lush, and available 24 hours per day. Please advise.

This tweet is perfectly "on brand" for @IHOP since it's as distasteful as most of the chain's food. pic.twitter.com/cr4Asn7Zal

Obviously, IHOP had to make amends for the juvenility.

Earlier today we tweeted something dumb and immature that does not reflect what IHOP stands for. We're sorry.

Thanks for admitting fault, IHOP, but we’re sorry to say that your joke fell flatter than the pancakes you were purportedly trying to sell. Maybe you should try to poach the Denny’s social media team?

Photo via Chris Barber/Flickr (CC BY 2.0)