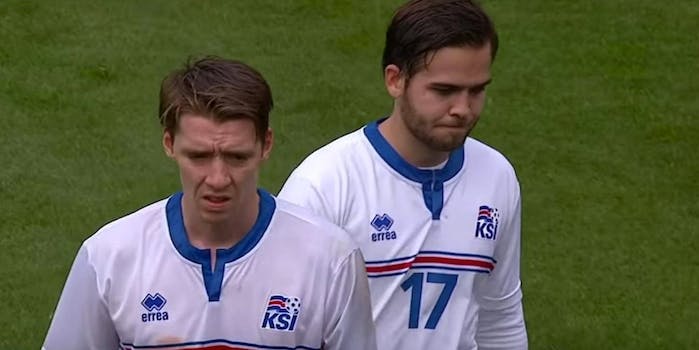 Much like training for the physical sport of soccer—sorry, football—live tweeting and subtweeting are social-media crafts that take months, possibly years, to perfect.

After Iceland’s 1-1 tie of Portugal in the UEFA European Championship, it would appear that the owners of the account Reykjavík Grapevine have been training their Twitter fingers for this momentous tournament.

And now the unfortunate Portuguese will feel the mighty thunder of Þór's Icelandic warriors. #Euro16

On Tuesday, Portugal—the eighth-ranked team in the world—played Iceland, the smallest country to qualify for Euro 2016 and which is ranked No. 34. During the match, the Twitter account for the Reykjavík Grapevine, an English-language tourist publication for all things Iceland, reacted as any other impassioned fan cheering for a David against a team of Goliath-regarded proportions would: It trash-tweeted Portugal straight through it.

You can see the fear on our puny opposition's faces. They know the Norse hellfire that awaits them. #Euro2016

From Iceland launching into the offensive to Portugal’s players collapsing one-by-one, the crew at the Reykjavík Grapevine kept Twitter fans engaged with biting comments and majestic hyperbole. The Guardian chronicled and contextualized the account’s Twitter rampage, but here is just a handful of our favorite drags.

Lol. Ronaldo. Lol. The nerves are showing. He is scared of the mighty thrashing that is to come. #Euro2016

A weak shot from one of the wilting manboys of Portugal stopped with a flick of one mighty Icelandic hand. #Euro2016

Óðinn's breath propelled our heroic goalie to swat away that weak-ass header. #Euro2016

Ahem. If Twitter is inviting you to translate that goal tweet from Turkish, tell them it was a Viking battle roar. #ISL #Euro2016

This is but the first chapter of #EuroSaga. Now, our players frolic in the French fields and regain their heavenly energy. #ISL #Euro2016

Throughout the match, Iceland fans praised the publication’s brilliant commentary, with some expressing hope that the team makes it to the Euro 2016 finals, if just to read the account’s cheeky burns. Even Twitter’s UK Moments picked up on the action.

And the winners of Twitter this evening are… #ISL #EURO2016 https://t.co/VRvQA5xmiG

Check out @rvkgrapevine for the best ever live twittermentary. I made that word up. But the feed is genius.

Can't wait for the next Iceland match so there's more of this commentary. https://t.co/4kratdAvt5

Football twitter was won tonight by @rvkgrapevine – have a look at some of their Nordic god-like tweeting. https://t.co/kmEvtWGBuB

I want #ISL to make it the #Euro2016 final just so @rvkgrapevine can keep tweeting commentary. Best comments on Twitter. Áfram Ísland!

Didn't know I gave a shit about football until https://t.co/WVsHwFfh4u

Fair to say this is an alternative perspective of the Iceland game from @rvkgrapevine. https://t.co/aiFTo6X51M

After Iceland’s win/tie, the Reykjavík Grapevine even jabbed at Portugal team captain Cristiano Ronaldo for his childish reaction to his team’s loss.

Iceland plays Hungary next on Saturday at 12pm ET. Hopefully the team can pull its weight and continue to let Twitter bask in the glory that is #EuroSaga—at least for a few more weeks.