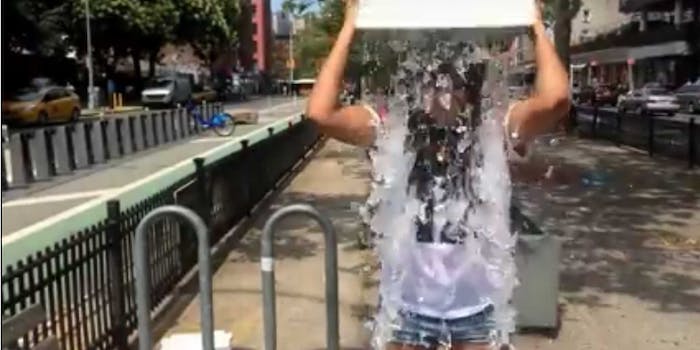 I just poured a bucket of ice water over my head on a crowded median in Manhattan, and I have only the vaguest understanding of why.

Over the last week, my social media feeds have been filled with videos of millennial friends of mine pouring ice water over themselves: in the shower, in the backyard, everywhere. However, since I only watch Facebook videos on mute while in the bathroom at work, other than seeing some variant of the words “ice bucket challenge” and #teamALS in the captions, I had no idea what was actually going on, other than that people were pulling this stunt, and then publicly calling out their friends to do the same. Despite not having a backstory on the trend, my “fear of missing out” alarms started going off, and when a good friend referenced being tagged in the challenge, I instantly asked her to tag me too. I may not have remembered what ALS stood for at the time, but damn if the narcissist living inside of me didn’t want the chance to make a hilarious video as well.

The ice bucket challenge originally started a few weeks ago as a golf trend to raise money for charity via a simple premise: post a video dousing yourself in ice water and tag others to do the same. If they don’t, they donate to your favorite charity. Matt Lauer notably threw down the gauntlet to Martha Stewart, after being challenged himself by golfer Greg Norman. But the challenge was quickly associated with ALS—amyotrophic lateral sclerorsis, a progressive degenerative disease known colloquially as Lou Gehrig’s disease—when ALS sufferer Pat Quinn issued the challenge to his friend Pete Frates, a former Boston College star athlete, who also has the disease. It was Frates’ Facebook post, tagging and urging others to participate in the challenge that took the trend viral: It spread like wildfire through Boston and quickly went national shortly after, with everyone from the New York Giants to members of Congress getting in on the action. (Congressman Joe Kennedy’s famous grandmother, Ethel Kennedy, even issued the challenge to President Obama this morning, which would officially give us perhaps the only Obama family video to top Michelle Obama’s “Evolution of Mom Dancing.”)

But the virality of the trend brings us back to the inevitable debate about the success of hashtag activism: Does it actually affect change? Barbara Newhouse, president of the ALS Association, pointed out that in the last 10 days, donations have surged over 1,000 percent thanks to the awareness that Frates and Quinn have brought to the issue. The ALSA raised near $160,000 in the last 10 days, up from $14,480 from the same time period last year. Frates’ wife Julie points out that even if the challenge hadn’t proved financially successful, awareness alone was a major goal for them. As she told Elle, “So many people don’t understand what it is. When Pete was diagnosed, I had no idea it was terminal. I thought it was really bad, but you could live with it. So for us, even if they just see the ice bucket challenge and Google, ‘What is ALS?’ that’s a success, because that’s really all we can ask for.”

The hashtag activism argument tends to rear its head from time to time: The challenge to #BringBackOurGirls from earlier this year was reminiscent of #KONY2012, vaguely sexual Facebook statuses about where women like to place their purses in 2012 were just another send-up of 2010’s overshare on bra color to raise awareness for breast cancer. And while it’s excellent that the ALSA was able to turn a viral video tide into actual monetary gains, the problem truly does lie with the fact that they, and other organizations, are willing to settle simply for awareness in lieu of action. Awareness should not be an end goal.

I’m embarrassed to admit this, but when I saw the #strikingoutALS hashtag, despite being a college-educated, Grey’s Anatomy-addicted hypochondriac, I confused ALS with AML, acute myeloid leukemia, and filmed this video thinking I was helping stamp out cancer. Had I not had an article to write about it, I likely would have continued to labor under this delusion, just glad that I got a fun Facebook status out of it while feeling perhaps a small twinge of sadness for cancer patients, before moving on with my life. That’s not to say that everyone who takes a similar challenge will be as seemingly unbothered as I was, but with no viable way to quantify awareness, it’s hard to truly measure the stickiness and success of a campaign like this in the years to come, once the trend has worn off.

All the same, I took the #IceBucketChallenge, not just to raise awareness and money for ALS, but as mentioned in the video, to raise awareness for actually being aware of what we’re supporting when we join the retweet-for-charity cycle. If I could, I would tag you all so you had to do that same.