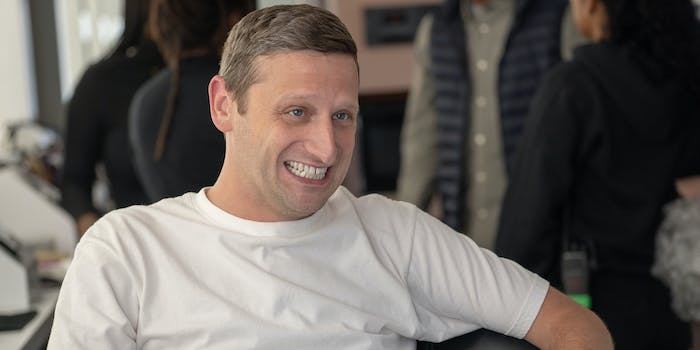 ‘I Think You Should Leave’ season 2 review: Is Tim Robinson … okay?

Robinson takes the viewer to dark, manic new places in his sophomore effort.

I Think You Should Leave With Tim Robinson, the Netflix sketch series co-created by Robinson and writer Zach Kanin—who had previously worked together on Saturday Night Live and Detroiters—premiered in April 2019 to near-instant acclaim. The six-episode freshman season focused primarily on socially awkward characters who often went to extreme lengths to double down on their actions, often resulting in chaotic, absurd situations.

I Think You Should Leave With Tim Robinson: Season 2

Though it was quickly renewed for a second season, the COVID-19 pandemic delayed its release for more than a year. In the interim, the series only continued to grow in popularity, particularly on the internet, where the various sketches have been co-opted as fodder for endless memes. (Most notably, the one with the hot dog guy—“We’re all trying to find the guy who did this!”—essentially became the perfect encapsulation of the year 2020 and the downfall of the Trump administration.) It even went on to inspire a few popular meme accounts—to the delight of Robinson himself.

Released today, July 6, season 2 of I Think You Should Leave sets the tone pretty quickly. In the first episode alone, a sketch involving Robinson’s character—the host of a prank show called “Everything is Upside Down”—begins to have an existential meltdown while dressed in poorly constructed prosthetics in the middle of the very mall food court he was sent to terrorize.

“I don’t even wanna be around anymore,” surmises Robinson’s character, after complaining that the suit is too hot and he can’t breathe. “Like, you don’t want to live anymore?” asks his producer, while giving him cues in a nearby van. “I don’t know,” replies Robinson.

Indeed, the batch of new episodes sinks to twisted new depths, which should both delight fans of the series while making them squirm uncomfortably at the same time.

Similar to the first season, many of the sketches are prolonged to maximize the impending dread. In one bit, a group of old college friends gathers at a restaurant to have dinner with their old professor, only to have the meal ruined when their mentor can’t stop fixating on his former student’s burger. And while that premise may sound tame enough, sure enough, Robinson takes it to an unexpected, disconcerting place.

In another wholly uncomfortable sketch, an office employee begins stalking and threatening a coworker to demand compensation for helping him out of a mildly embarrassing situation, which devolves into something akin to a horror movie. Agonizingly, Robinson draws it out to near the 10-minute mark—and trust us when we say you’ll be aware of each passing second.

Once again, the bulk of the sketches occur in familiar settings: corporate boardrooms, restaurants, and social gatherings, to test the limits of what seemingly innocent bystanders are forced to tolerate. But while many of the themes are similar, the second season—much like Robinson’s characters—doubles down on the mayhem.

For example, in season 2, Sam Richardson reprises a similar character as an MC to an inappropriate childrens’ pageant of sorts. This time, it takes place during a corporate retreat, featuring “Little Buff Boys”—which is exactly what it sounds like—one of which is described by Richardson as a “little brick shithouse” among other colorful adjectives. There’s another recurring bit involving Santa Claus, portrayed as the star of an ultraviolent, ultra-profane action film.

There’s also a litany of guest stars this time around, including Bob Odenkirk and John Early of Search Party, who plays an over-the-top character worthy of Elliot Goss, for those familiar with the millennial-skewering satirical comedy. Child actress Julia Butters—who starred in Quentin Tarantino’s Once Upon a Time in Hollywood and was once compared by Leonardo DiCaprio to a “young Meryl Streep”—is featured in a spoof commercial that at one point involves the 12-year-old savoring the aroma of Macanudo cigars.

Along with Richardson, other frequent collaborators of Robinson’s, Tim Heidecker and Conner O’Malley, pop back up. The latter brings his manic energy to a hilarious Blues Brothers-themed sketch in which he is somehow, just barely, outmatched by Robinson himself. O’Malley likewise provides tongue-in-cheek lyrics to a track over the end credits of episode 4 that seems to be completely unrelated to anything that transpires over the season.

Meanwhile, Shrill actress Patti Harrison, of last season’s “Santa brought it early” sketch, absolutely steals the spotlight in both appearances she makes. One concerns a Shark Tank parody about a potential investor who made her fortune suing the city after getting sewn into the Charlie Brown float at a Thanksgiving Day parade. “To this day, I hate bald boys. I can’t stand bald boys,” Harrison deadpans. “Every time I see them, I think I’m back in the pants.”

But again, one has to wonder where Robinson’s mind was when writing the follow-up to his cult hit. If much of the inspiration for season 1 came from rejected SNL sketches, it only stands to reason that our dystopian, post-2019 landscape may have influenced the second season.

Perhaps the most disturbing sketch is also the final of the season. In it, a 58-year-old man featured in an ear-piercing video shown to Claire’s Accessories customers admits, among other things, that he laughs for 10 minutes per day so that when he eventually dies and looks back on his accomplishments, he’ll be able to trick his dead self into thinking he led a happy life.

That is dark, even by I Think You Should Leave standards. It also begs the question: is Tim Robinson okay? And at the same time, are any of us? Those in need of some highly overdue cathartic humor certainly won’t be disappointed.