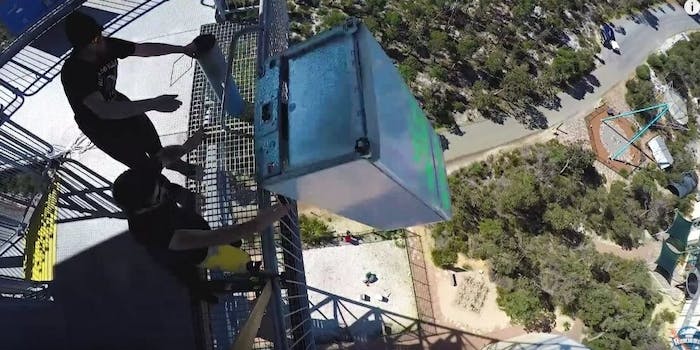 YouTubers drop a fridge from 150 feet up, and the destruction is delicious

The How Ridiculous channel on YouTube has received tens of millions of page views simply by dropping items off a 150-foot tower. The Australian trio has caused major destruction by releasing giant darts, bowling balls, and a 60-pound ice block.

Now, watch what happens when they release a freakin’ refrigerator. First, they drop various other household items off the tower, including a dishwasher, a La-Z-Boy chair, and a toilet. And then it’s time for the main event.

It might have taken How Ridiculous quite an effort to lug the fridge up the 222 steps of the 45-meter tower. But the end result was fantastic.

Next up for the YouTubers? They said if this video receives 1 million likes, they’d throw a fridge onto the top of a car.