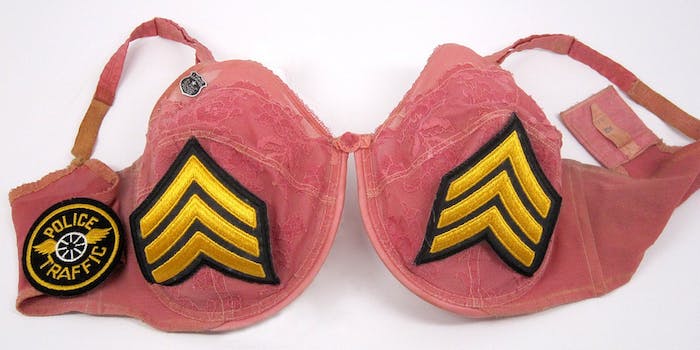 Finding a bra that fits well is never easy, but for one woman in Austin, Texas, it was even more difficult than usual.

Kylie Jack, a transgender woman, visited Austin’s Petticoat Fair, which specializes in intimate apparel. Jack wanted a bra fitting, as proudly advertised on the company’s website. What should have been a relatively straightforward and simple affair instead has turned into a PR nightmare for the company and outrage among transgender individuals and their allies.

After Kylie posted about the experience on Facebook and word of her alleged treatment spread, Petticoat Fair owner Kirk Andrews issued a response via the company’s Facebook page. Andrews did not dispute Kylie’s treatment and stated that although she was not allowed into their dressing rooms, they called her to a separate area, where their fitter “invited Kylie and companion…so they could have this delicate conversation privately.” The “delicate conversation” he is referring to apparently seems to be a conversation about her genitals.

He goes on to say: “Finding the right solution for the customer—and for our staff—requires an open dialogue about where the individual is in the transition process.“

While Andrews is right that transition is a process, it is one that is different for each individual. There is no common end point of transition, and the goal of the process is to become as comfortable in one’s own skin as possible, not to satisfy everyone around them or measure up to the subjective evaluations of others. The point at which someone “becomes” a woman is the point at which they identify as one, not when others acknowledge them as one.

Positioning surgery as the endpoint of the transition process harms trans individuals, because not only is it often prohibitively expensive (especially for a population facing high rates of poverty and difficulty obtaining employment), but not all trans women even feel a need to have surgery. Surgery requirements universalize what is a personal journey, and they contribute to an environment in which transgender individuals have difficulty obtaining accurate identification.

As many who commented on Andrews’ apology also noted, genitals have nothing to do with trying on bras. Why is it necessary for trans women to have an “open dialogue” about their genitals with strangers when it is completely irrelevant to the situation? They would not be visible during a bra fitting, and there is no reason to assume that they would come into play at all in such an interaction.

What exactly are transgender women supposed to do? Andrews claims, “We offer solutions throughout the transition process, from showing and recommending product that can be taken home, tried on and returned if it doesn’t fit, all the way up to the full dressing room experience.” In other words, trans women can be shown products, and it’s totally fine if they buy them, but they have to go home, try them on, and return them. They haven’t earned their way up to the “full dressing room experience.”

If that weren’t bad enough, he continues:

Just as a gym won’t allow men in a women’s dressing room (and vice versa) for the comfort and safety of its patrons, we don’t allow men or boys above a certain age in our dressing area. Despite our otherwise inclusive approach, those who might be or who outwardly appear to be men (regardless of how they are dressed) pose a delicate challenge, and in the case of imposters, can pose a safety risk to the Petticoat Fair staff.

This is the same old, tired mischaracterization of trans women as potential imposters waiting for an opportunity to prey on women that has been shown time and again to be totally inaccurate. Not only is it inaccurate to portray trans women as potential sexual predators, but it is insulting, especially when they are more likely to be victims of harassment in bathrooms themselves.

Furthermore, who determines if someone might be or outwardly appears to be a man? What exactly are the criteria? Short of a sign saying “you must be this femme to enter dressing room facilities,” I don’t see how there could be any objective evaluation in that judgment.

The response states that Petticoat Fair “errs on the side of caution” but “never on the side of discrimination or intolerance.” According to Austin’s non-discrimination ordinance, individuals have the inalienable right to “obtain goods and services in a public accommodation without regard to race, color, religion, sex, sexual orientation, gender identity, national origin, or age.” If the city were to deem that Petticoat fair’s actions violated this ordinance, then it would be within their power to prevent this policy from continuing.

While it has not been shown as of yet that the policy or Kylie Jack’s alleged treatment would be in violation of the ordinance, Andrews did express a willingness to engage with leaders in the transgender community “to discuss a better approach.” Let’s hope he’s sincere, and by addressing the issue, he can come to a better understanding of how to deal with transgender customers. It’s time to give trans people the equal access that they deserve, whether they have had surgery or not.

Kylie Jack posted this note to her Facebook page:

For anyone following the story of my treatment at Petticoat Fair, I had a chance to meet with the owner, Kirk, on Monday. Kirk is very sincere and authentic about wanting to helping all women including trans women. He has been rather quickly thrown into keeping up with current language, policy, and treatment of transgender issues, and is working really hard to get caught up.

Kirk’s first post on Sunday was meant to clarify policy and misunderstandings. Whether or not you agree with his statement, he did not intend it as an apology. He has since personally and sincerely apologized to me for what happened. Additionally, his latest post to Petticoat Fair’s Facebook page also apologizes to other trans people who have not felt welcome or were turned away.

Kirk is in touch with the Transgender Education Network of Texas who will help guide him in setting a new, more consistent, and more fair policy. He says they are aiming to announce something in a couple of weeks, which is honestly quicker than I thought might happen. I’m looking forward to the updated policies, being able to return to the store, and updating my reviews to reflect the 5-star experience I know they can offer. Kirk has provided a reasonable time frame for them to work on their policies, so this will be the last I have to say about it until then.

Petticoat has a small handful of employees, and Kirk is pretty much the only one able to handle social media, even with the assistance of a PR person. The pressure on them is immense right now. It will be hard for them to move forward if they are constantly responding to calls, emails, tweets, and Facebook posts. Do what you feel is right, but consider they have limited time that would be better spent fixing their policy rather than responding to people individually.

At the beginning of this, I asked for a boycott of Petticoat Fair as an act of solidarity with trans women. I am rescinding this request for the time being. Some folks will be happy with where the situation stands now, and some will want to wait to see what happens with the policy. So, I leave it up to every individual who has supported me to make a choice about shopping there or not, or to update reviews according to his response.

Thanks to Kirk for reaching out to me in good faith and trying to work through this. Many businesses would have waited for the social media storm to end, then done nothing. Given the size of their business, I feel they’re doing their best to move as quickly as possible to help resolve this.

Massive thanks to everyone who has supported me, trans folks and cis allies, public and privately. Your support—kind words, solidarity, recommendations—has been overwhelming. Your responses have meant so much and I feel like even in the face of bad policy, public opinion is slowly changing for the better for transgender folks. Your acceptance and support of transgender folks means we have a fighting chance.