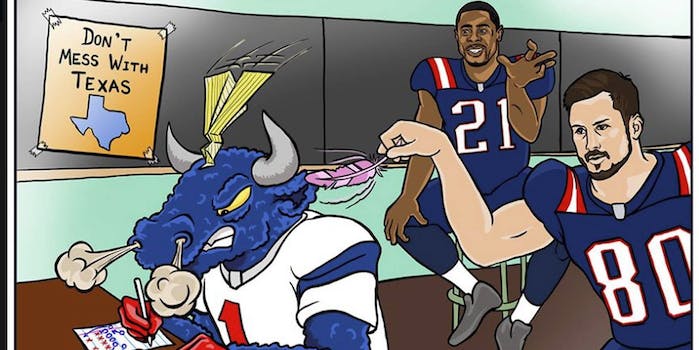 It’s hard to find a silver lining to the Houston Texans’ humiliating loss to the New England Patriots in primetime on Thursday night. The Texans were supposed to show off their new-look offense, led by quarterback Brock Osweiler, and prove that they were a true contender. Instead, they were shut out and embarrassed by the Patriots’ tough defense and third-string, rookie quarterback.

The latest edition of Tom Brady’s TB Times said it all:

But there was one small consolation:

Since the #Texans rushed for over 100 yards, enjoy a free 6pc McNuggets from @McD_Houston.

Lamar Miller helped push the Texans over 100 yards rushing for the night. That meaningless stat unlocked a throwaway coupon for some McNuggets. Apparently, this didn’t cut the mustard (or barbecue sauce) with most fans:

How's about y'all play some McDefense?

Anywhere handing out free donuts? You know, for the goose egg? @HoustonTexans https://t.co/PpvCvzj8Jk

No thanks. I have no appetite after last nights beat down.

This is what happens when brands swing and miss on Twitter. It’s a beautiful thing to watch unfold.