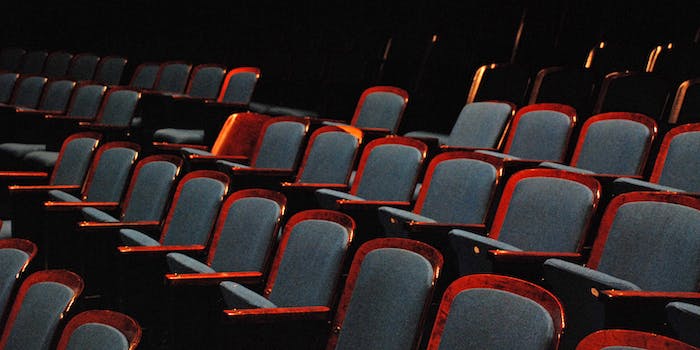 As we collectively ring in the new year, Hollywood is especially anxious to toss out the old.

With the majority of the domestic grosses of this year’s major blockbusters now ostensibly tallied, 2014 stands as the weakest financial year for American movies since 1995. Things are better internationally of course, where the big winner was (frighteningly) Transformers: Age of Extinction, which, despite missing the $300 million blockbuster mark domestically, was the only film from last year to crack $1 billion globally. Nevertheless, Hollywood’s 19-year low at home has many in the industry trying to figure out what went wrong, while simultaneously looking toward the future.

“Whenever ticket sales take a tumble, Hollywood pulls the assertion of cyclicality out of its hip pocket: Just wait until next year—next year will be our best ever,” writes the New York Times’ Brooks Barnes. “In the case of 2015, it might be true. Coming are expected box-office monsters like Star Wars: Episode VII—The Force Awakens, Jurassic World, Furious 7, Avengers: Age of Ultron, Fifty Shades of Grey, the James Bond film Spectre and animated entries like Minions and Pixar’s Inside Out.

So looking at next year’s slate of movies, Hollywood clearly doesn’t need to panic. Not yet, at least. However, after a year in which box office returns were down by 15 percent, they would also be fools not to learn anything.

With that said, here are a few tips the entertainment industry should take away from 2014.

1) Give us something we haven’t seen before

This is really the most important one to remember here. At the very least, it’s the reason why Guardians of the Galaxy ($332,965,525 million domestically) was the biggest bright spot in an otherwise mostly forgetful year at the American box office. Guardians was a mix of superheroes meets Star Wars, crafted with a playful energy and humor which, thankfully, didn’t take itself too seriously. While other blockbusters drove home dire stakes and life or death consequences again and again, Guardians managed to prove that you can tell a story where the stakes aren’t any less high, but where you also acknowledge the ridiculousness of the premise; this is a movie which features a talking raccoon, after all. Marvel had a lot on the line with Guardians, but due to the film’s frankly silly nature, it paid off. It’s not a perfect movie, but it was a box office savior in 2014.

Of course, originality also helped out films like Interstellar and Gone Girl too. Particularly in the case of Interstellar, as it wasn’t based on anything (Gone Girl was adapted from author Gillian Flynn’s extremely popular novel of the same name), though both films stand as good examples of what can happen when you get the right people working on the right project. Directors Christopher Nolan and David Fincher, both among the best working in Hollywood today, made smart casting decisions and bet on less popular genres (sci-fi, crime thrillers) to give adults a decent alternative to the more kid-friendly types of superhero films that crowd the current market. And although neither film qualifies as a runaway phenomenon, both did very  well (Gone Girl especially, taking into account it’s comparatively meager budget of $61 million.)

The Amazing Spider-Man 2 underperformed. The same thing happened with Man of Steel in 2013. Even Captain America: The Winter Soldier, for how well it did, wasn’t on par with The Avengers or Iron Man 3. But as we’ve already noted, Guardians won the year and is now slated to become the next big Marvel franchise. Meanwhile, another major success from 2014, The LEGO Movie, will get a sequel in 2017. The fact is that whether you think franchises are ruining Hollywood (as many say they do) or not, they aren’t going away anytime soon. But Hollywood also needs to inject new franchises into the mix of already successful and well-known ones that we’ve all seen.

Think about this: There was an Expendables 3 this year. We literally got another Expendables movie in place of, say, anything else. And now, unsurprisingly, after the latest installment grossed just over $200 million worldwide, the Expendables franchise doesn’t look like it can be stretched any further (minus the upcoming female-centric/absurdly named The Expendabelles) and will likely live up to its name when executives determine whether to make another.

The titular Guardians of the Galaxy and the heroes of The LEGO Movie resonated because they were unfamiliar to us. And as great as Spider-Man, Superman, and Captain America are, occasionally we all need something we haven’t seen before.

Other successes from this year that haven’t been discussed so far include Dawn of the Planet of the Apes, 22 Jump Street, Divergent, The Hobbit: The Battle of the Five Armies, and The Hunger Games: Mockingjay – Part 1 (the second-highest grossing film of the year domestically, next to Guardians). What do all of these have in common? Most importantly, they’re all franchise films, and none of them are superhero movies, proving that you can make blockbusters which don’t just feature characters in capes.

It’s true that none of these movies shattered any records per se (although they did break a few), but they all managed to be among 2014’s highlights, without coming from Marvel or DC.

4) Make sure to balance the major and minor installments

Captain America: The Winter Soldier is not as big of a deal as The Avengers: Age of Ultron. Just like The Hunger Games: Mockingjay – Part 1 is not as big of a deal as Part 2 will be. While both films were successful on their own counts, they were undoubtedly placeholders for much bigger entries in the franchise, which is why, in the case of Mockingjay, viewers might have chosen to sit this round out and wait for the grand finale. While franchise fatigue has loomed over film series since the days of Terminator and Star Trek, perhaps this is less a case of franchise fatigue than minor installment fatigue.

So while Hollywood is busy asking why this year’s domestic box office wasn’t better, maybe they should be thankful in proportion; the truth is that all major franchises will have installments which are less and more successful than others. Some years are just not going to be the showstoppers that others are, and a lot of that comes down to the banality of scheduling.

5) Remember that women can lead blockbusters, too

One thing no one seems to be talking about from the 2014 box office is just how many movies with women at the center crept into blockbuster territory. The Fault in our Stars, Lucy, Divergent, Gone Girl, Maleficent, and, of course, the latest Hunger Games installment all fall into this category. Not that this should be a surprise to anyone, considering that women also make up the majority of moviegoers.

The key is to remember that despite the disproportionately large amount of blockbusters with male leads that Hollywood produces, movies starring women are capable are making of huge amounts of money. In fact, studies have shown that films featuring women in a lead role earn more than their male-centric counterparts. According to the folks at FiveThirtyEight, films that passed the Bechdel Test in 2013 earn back $2.68 for every dollar spent on the movie, whereas ones than failed only earned $2.45. The entertainment industry would be wise to keep this in mind for 2015 and all subsequent years.

6) Branch out from summer

This has already been discussed to death, but the main reason everyone has been so down on the 2014 box office was because of a lackluster summer, save for Guardians. However, evidence suggests that the season of summer itself may be part of the problem here. With huge movies like The Winter Soldier opening in April, and Guardians making a killing in the typically lesser summer month of August, it’s starting to look like Hollywood’s peak summer stretch (May, June, and July) is slowly becoming less important.

In any case, the importance that is placed on summer seems to be changing, and while there’s no way that the conceit of the summer blockbuster is on the verge of dying entirely, 2014 has proven that blockbusters needn’t be relegated to what are typically thought of as “peak” months.

There’s really no formula for this one, other than to just do it. Comedies have taken a backseat in Hollywood the last few years anyway, thanks to limited crossover appeal overseas, but looking at the quality of many of the genre’s recent offerings, perhaps there’s a good reason for that, too.

Although 2014 did produce a few comedic successes like 22 Jump Street and Neighbors (bolstered by a miniscule budget of $18 million), it also brought us the likes of Sex Tape and A Million ways to Die in the West, neither of which performed well domestically. More recently, we’ve also seen lackluster comedies of the family-friendly variety stumble, too, with Night at the Museum: Secret of the Tomb and the remake of Annie both underperforming. Then there’s The Interview, which, despite all the hurrah, has managed to come up short financially, not to mention critically.

As Sony‘s leak show, no one at the studio wants to be making these movies anyway, especially when they happen to star Adam Sandler. One insider at the company wrote, “There is a general ‘blah-ness’ to the films we produce. Although we manage to produce an innovative film once in awhile, Social Network, Moneyball, The Girl with the Dragon Tattoo, we continue to be saddled with the mundane, formulaic Adam Sandler films. Let’s raise the bar a little on the films we produce, and inspire employees that they are working on the next Social Network.”

It’s hard to give Hollywood any advice and expect that they’ll listen, but these emails show they already know what the problem is. The question is: After a dismal year, will they actually do something about it?