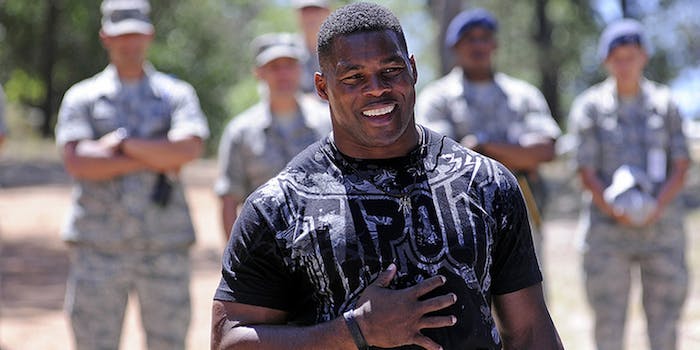 'I would take a bullet, put it in the cylinder, spin it, tell you to pull it.'

Herschel Walker is one of the baddest men ever to take the football field. His workout regime was legendary (at his peak, he was doing as many as 5,000 pushups and 3,000 situps a day), and after winning the 1982 Heisman Trophy, Walker—considered by many to be the best college running back of all time—went on to a solid NFL career, earning two Pro Bowls and recording more than 8,000 rushing yards in 12 seasons.

But Walker has struggled with his mental state throughout much of his life. In 2008, he released his book, Breaking Free, in which he revealed that he suffered from dissociative identity disorder, formerly known as multiple personality disorder.

In the past, Walker said he originally forced himself to seek help after he had murderous thoughts because of a late car delivery, and on Thursday’s Highly Questionable on ESPN, Walker said he’s played Russian Roulette “more than once” in his life.

The entire interview is a fascinating look at a man who was so strong physically but who was having a hard time mentally.

Said Walker: “If you came to my home and wanted to challenge me at anything, I didn’t think you were worthy enough, because I  worked out like a madman. Some people don’t put the time in I put in. So, I would take a bullet, put it in the cylinder, spin it, tell you to pull it. People say, ‘Herschel, you’re nuts.’ They walk away. I take that gun and put it to my head and snap it… I was so fired up that I could overcome anything. I didn’t realize it was from the anger, all the anger that I had that I didn’t like myself. I was not happy with who I was …

Since he released his book, Walker continues to talk about mental health issues because he says people he knows are still suffering, and by seeking treatment in a mental hospital, he says he found love for himself.

So, Walker speaks out and to tries to erase the mental health stigma.

“Everybody gets ashamed when you mention the word ‘mental,'” Walker told the Orlando Sentinel in May. “Well, I’m not ashamed. I had a problem. I got help. And I don’t think anybody—inside or outside the NFL—could compete with what I’m doing today.”