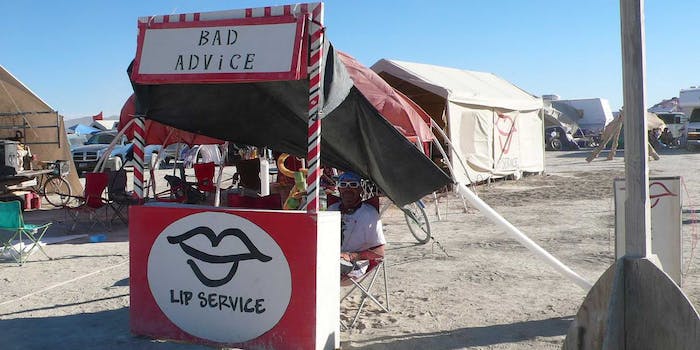 Miss Information meets misinformation in Here's That Bad Advice You Were Looking For.

If you read advice columns, you’ve probably had facepalm moments when you thought “What an unbelievably clueless letter-writer” or “You call that good advice? I could give better advice while drunk and grunting through a ball gag.”

Similar thoughts likely inspired the creation of Here’s That Bad Advice You Were Hoping For, a blog that’s been on Tumblr since January. It reprints and then provides answers for letters sent to various advice columnists, with one thing in common: They can basically be summarized as “Please, tell me I’m not being stupid despite the massive evidence suggesting I am.”

The blog launched on Jan. 13 started with a snippet from a question that “Flirty Friend” asked Nerve.com’s Miss Information, after enjoying a one-night stand with someone who was cheating on his significant other:

“I know I want to continue chatting to him, but I worry that it’s wrong on several levels: 1. He has a girlfriend, and I’m pretty sure she’d be upset by our correspondence. 2. I’m not in a relationship and I could easily develop feelings for him. 3. I’m not sure it’s entirely possible to have a friendship with someone who you’ve expressed sexual desire towards, who’s expressed the same towards you. All that said, I really enjoy talking to him and he says the same about me. If we make the effort to keep things more platonic what’s the harm?  —Flirty Friend”

Miss Information advised Flirty Friend to end her acquaintance with this man, but ThatBadAdvice told Flirty Friend what she obviously wanted to hear:

“Congratulations on finding such a stand-up guy! You’re right to want to continue chatting with an attached man who is keeping you secret from his girlfriend, under the guise of a ‘platonic’ relationship that revolves around you telling each other your deepest, darkest secrets and reminiscing about that time you had sex and speculating about the sex you maybe could be having. Strong friendships are built on a web of secrecy and lies.”

Two weeks later, Carolyn Hax of The Washington Post published a letter that asked, “Would you attend a wedding with no alcohol? Would it matter if the couple were in recovery, vs. trying to save money?” Hax said she’d already attended such weddings, since “I go for the couple, not the menu or the rationale behind it.”

But ThatBadAdvice assures readers that booze-free celebrations aren’t worth their time: “The point of weddings is to drink, not to honor the love and lifetime commitment of friends and family in the way they choose to do so.”

What about the unhappy new divorcée who contemplated celebrating Valentine’s Day by ordering roses and sending them to herself at work but feared this might look a little crass? ThatBadAdvice assured her such concerns were groundless: “This is the best idea I’ve ever heard. You sound like you’re in a really good place right now.”

Of course, poking fun at inane advice columns is nothing new. Long ago (by Internet standards), back in 2003, a now-defunct website called Child-Free Abby rose to moderate online fame after being honored as the (also now defunct) “Cruel Site of the Day.” CF Abby reprinted not only advice-column letters but the columnists’ responses, and was just as as likely to criticize the advice columnist as the letter-writer. The CF Abby archives have been offline for years and no mirror-sites are available, though here and there you can find individual columns cut-and-pasted (sometimes by Abby herself) in ancient Google groups or old discussion forum threads.

To this day, a handful of CF Abby fans still post advice columns and scathing commentary about them to a CF Abby Tribute group on LiveJournal. But CF Abby focused primarily on parenting and childfree issues, while ThatBadAdvice offers self-destructive advice for all aspects of life.

When a man wrote Slate’s Dear Prudence to complain that his partner, an Israeli who’d served a term of compulsory military service, refused to answer certain questions about it, ThatBadAdvice assured the letter-writer:

“Your boyfriend’s past as a soldier is predominantly about you and your feelings, and it must be heartbreaking for you to watch him act as though the details of his confidential and mandatory military service, which occurred before you ever met, isn’t any of your business. … Someone in this relationship has deep-seated trust issues, and it’s definitely not you.”

Other important life lessons ThatBadAdvice offers include: thrift-store shoppers are dirty people and bad roommates; it’s a good sign if you’ve been dating someone for nine months and his family and friends still have no idea you exist; and you should definitely sneer if you know adults who occasionally read “teen” fiction because that can only mean they’re not as intellectual as your refined self.

If you currently have problems in your life and seek bad advice for them, you can ask ThatBadAdvice directly, or even write to offer some bad advice of your own. And remember: the best-tasting candy comes from strangers driving windowless box vans.