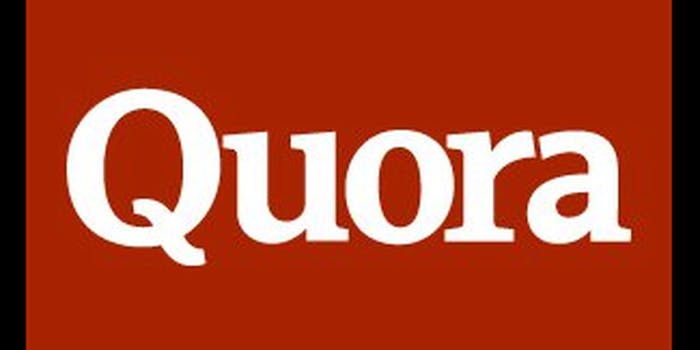 The Hater: Answer me this, What happened to Quora?

Every Tuesday evening, I am treated to something slightly worse than a Thrillist newsletter in my inbox—a weekly digest from Quora, the smart person’s question-and-answer website. About a dozen or so questions are culled from “content” that I allegedly follow and delivered to me in a tidy email where I once learned actual information.

Gone are the quirky questions that deserve to be made into National Geographic television specials—which I would willingly watch. I was once treated to nerdy delights like “Why can’t I control my individual toes?” and “How does Pandora determine songs to include in its database?” (Answers: motor homunculus for the former and uh, magic combined with research for the latter.)

Since then, however, I can only assume that Quora oversaw me reading People last week in the grocery checkout aisle. She apparently gave me the stink-eye and changed the questions accordingly. She’s judgey like that.

Now I get questions such as: “Has George Clooney had plastic surgery?” (Yes, and is “man enough to admit it,” wrote a commenter) And: “Why didn’t Eric Bana reprise his role as Hulk in The Avengers?” And that, ladies and jellyspoons, proves one thing: At least one person is thinking about Eric Bana. I mean Munich was decent, but that’s pretty much it.

Anyway! Maybe it’s just me, but hasn’t Quora shifted from something highbrow/brilliant to lowbrow/despicable? It’s changed from being a likable, geeky portal about stuff you wouldn’t learn anywhere else to, uh, Yahoo! Answers.

If my unscientific and totally snarkerrific skip through Quoratonia is anything to go by, I am 100 percent right. There seems to be a creepy—and occasionally pervy—seedy underworld developing on Quora.

People are actively debating questions from “Has Sarah Palin had breast augmentation surgery?” to the BuzzFeed-approved “Why is cute for a cat to be big and fat when a person is big and fat it is not considered cute?” Someone also asked “Why is it morally acceptable to boil a live lobster but not a live cat?” (Answer: Because lobsters are ugly.)

And Quora has a lot going for it. It was dubbed “rather smart and entertaining” by the hoity-toity Wall Street Journal and other outlets. It’s also raising a nice round of funding, so someone is finding value in it.

“What’s the sexiest scene of all time in Hollywood film?” collected 18 answers—the most upvoted answer was Notorious. The semi-serious question, “Can you fuck somebody to death?” only got one answer though. So I guess we’ll never know.

Not as outlandish, but just as peculiar, are questions like what is the “sexiest men’s underwear” and the proper name of the “penis hole” in boxers. (It’s disappointingly called a “fly.”) Also, there are questions like this—probably lifted from Cosmopolitan—“What should I do if my girlfriend wants me to stop wearing some boxers that my ex-girlfriend gave me?” That brain teaser racked up 25 answers. The general consensus was “old underwear vs. sex. Only you know the answer that’s right for you.” So… Underwear?

I guess these questions are to be expected when you knock down the invite-only walls and open it up to any 99 percenter with a Facebook or Twitter account. Also, when you let people ask questions anonymously, an influx of penis inquiries is only to be expected. Penises are weird!

But if Quora is supposed to be so the place for “great answers” as it describes itself, why does it leave me questioning why it’s gotten so terrible? Maybe we should ask Quora.