I don’t know if anything is more American than American football. That's part of the problem.

I’m an American, and I live in America. That means I’m supposed to spend my Sunday days and Monday nights in front of a screeching TV set mowing on an Xtreme chicken wing extra cheese beer concoction while I don a garish, loose polyester, smock-like garment festooned with a fierce predator and the last name of someone whose annual salary I will never match in a lifetime of working.

I don’t hate all sports. It’s true I don’t make a point of watching (or doing) most of them, but I still kind of get their point.

I don’t know if anything is more American than American football. Although what the rest of the world calls football and what we call soccer is simpler and more interesting to watch than our football, we love our pigskin.

Baseball is American too. Some think it’s boring. Is it? Who cares. It’s a warm weather sport. You’re sitting in the sunshine, sipping on a beer, the smell of someone else’s cigarettes just far enough away. You don’t how long you’ll be there, and that’s fine.

Baseball: a metaphor for summer idleness.

But just like Christmas decorations going up in July, football too is starting earlier and earlier—if it ever finished at all. Oh, and football is a cold weather sport. And cold weather sucks.

Football: a harbinger of winter. 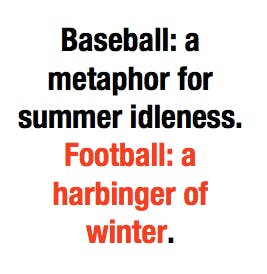 What about other winter sports? Hockey’s not boring, because there are fights. They’re like, built into the game. And basketball? What about it? Basketball is fast. A clock is constantly running and the ball is always moving and there’s the quick squeak of shoes on waxed flooring and if you don’t throw in time you get penalized.

Thirty minutes takes three hours.They start the clock, someone throws, someone else smashes into him, and then this guy falls down into the other guy, and then it’s like burly dominoes and then wheee! goes the whistle, the clock stops, and four seconds have passed. Then there’s another commercial. Who enjoys this stop-and-start? I can think of only two groups: people with poor bladder control and advertising agencies.

So I’ve been wondering: Why is football interesting?

Like most of us, when I don’t know about something, I go to the Internet. And like most of us, I recognized that maybe my hatred was founded on ignorance. Could an avowed football hater learn about the game and develop some sort of understanding, awareness, and empathy for those riveted to their TVs for eight months out of the year?

I first went for the low-hanging, like-minded fruit: the I hate football Tumblr and the I hate American Football Facebook page. After that, I thought this information from Cracked might help, but I went from trying to tl; dr. TheCHIVE actually had some interesting stats about football in general (78 percent of NFL players are bankrupt just two years after ending their careers?!), but otherwise, meh. One bright spot was this utterly hilarious piece about why godless liberals hate football; I feel so incredibly enlightened now. 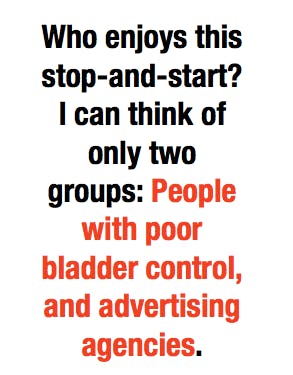 Maybe it was because I didn’t know the rules. I needed remedial learning. But football’s Wikipedia entry was useless. I tried to scope out the Beginners Rulebook from the NFL: snoozefest. I went for the third-grade reading level of Football for Dummies, but as I was paging through it, all I heard in my head was I don’t care! (without the “I love it.”) And the more advanced news, such as changes in football rules for this year? It might as well have been in Farsi.

To me, even after my little attempt to educate myself, it just seems like this:

What am I missing? Enlighten me, sports people.

Anyway, say you do love football but don’t see enough of it, or have to watch it in front of a laptop or iPad screen rather than a jumbotron. If you must stream online, there are plenty of ways you crazies can do it. Have at it!

I will, however, give you this. I think football fans and haters alike can agree to disagree, but we can definitely agree on this: Booing Ryan Seacrest was the best call of all.