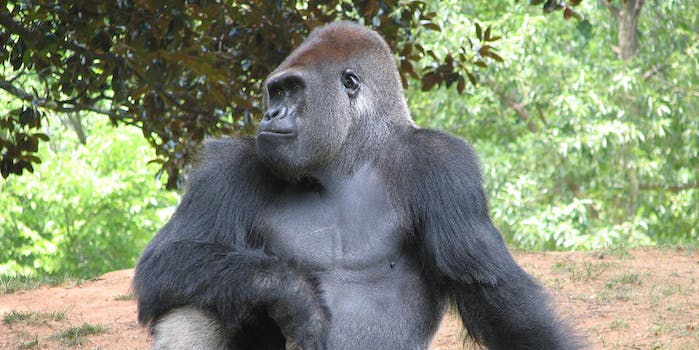 Online petition demands #JusticeForHarambe, for parents to be held accountable

Organizers want the parents of the child who fell in the gorilla enclosure punished.

The Cincinnati Zoo staff shot and killed one of its gorillas on Saturday after a 4-year-old boy climbed into the gorilla enclosure.

The zoo’s Dangerous Animal Response team determined this was a life-threatening situation for the child. However, some believe this all could have been avoided if the child’s parents had been paying attention, and a Change.org petition that calls for the parents to be held accountable has gained more than 140,000 signatures in less than 24 hours.

PLEASE morning shows, don't put these idiot parents on your programs. The gorilla is dead. NO ONE wants to hear from them. #Harambe

The petition, started by Change.org user Sheila Hurt, states “this beautiful gorilla lost his life because the boy’s parents did not keep a closer watch on the child.” It also claims that witnesses “heard the child state that he wished to go into the enclosure and was actively trying to breach the barriers. This should have prompted the parents to immediately remove the child from the vicinity.”

Some also believe the gorilla wasn’t even being violent but was instead trying to protect the boy.

Many on Twitter are also calling for the child’s parents to face punishment under the hashtag #JusticeForHarambe.

What makes all of this worse is that Harambe wasn't being aggressive. At all. I hope those parents get prosecuted. #justiceforharambe

There is also a Change.org petition that seeks to have the boy’s mother, Michelle Gregg, investigated by Child Protective Services.

Many parents are quick to point out that children are wily creatures, and even the most attentive parents may not have been able to stop this from happening. Gregg herself reportedly wrote on Facebook, “As a society we are quick to judge how a parent could take their eyes off of their child and if anyone knows me I keep a tight watch on my kids. Accidents happen but I am thankful that the right people were in the right place today.” Another witness also said she saw Gregg try to grab her son and keep him from entering the gorilla enclosure, but couldn’t get to him in time.

Maybe all of this could be avoided if we had a different system instead of paying $20 to a conservation organization only on the condition that we get to stare at some animals in captivity. Or would that undermine capitalism?