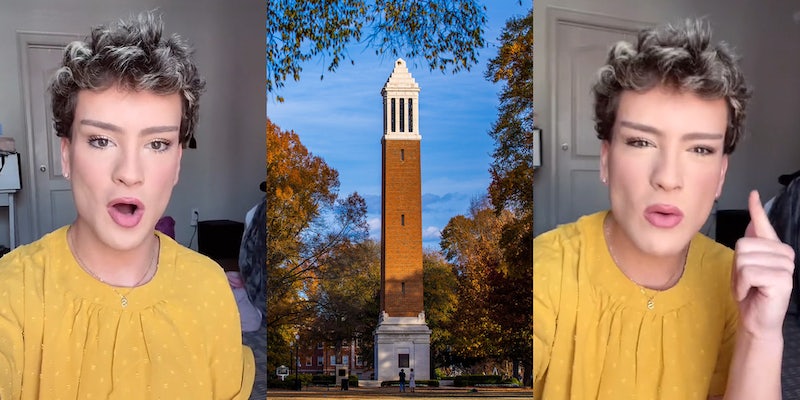 ‘You don’t need a sorority, you’ve got us’: Bama Rush fave Grant Sikes was cut

'Unfortunately, this chapter is closed.'

Grant Sikes, the trans student who gained thousands of followers on TikTok during Bama Rush, has been cut by all sororities.

Sikes, a student at the University of Alabama, has been documenting the outfits of Bama Rush, the now-viral process of Rush Week for sororities, since early August. Over the weekend, she revealed she was cut. In an Instagram post, Sikes said she was “dropped from my last house this morning” but that she is “hopeful of a future where everyone is welcomed for just being themselves⁠—everywhere.”

Grant’s followers reassured her that she had found a “community and sisterhood”—on TikTok. “You don’t need a sorority, you’ve got us.” wrote one commenter. The Grant Sikes hashtag has more than 850,000 views.

@shesinscrubs @Grant Sikes we stand with you, it was THEIR LOSS and you should be able to start your own chapter. Literally the only reason I was even paying attention to rushtok #grantsikes #rushtok #uab #alabamarush #universityofalabama #rushtok2022 #grantdeservesbetter ♬ Follow me – Quandale Dingle • Friends

There was similar pushback last year, when Bama Rush fave Makayla Culpepper was dropped. While there was a lot of support for Sikes, there was also transphobic content; Libs of TikTok, the right-wing Twitter account that targets the LGBTQ community, posted one of Sikes’ Bama Rush TikToks in order to mock it.

In the year since Bama Rush went viral, some paranoia has apparently crept in; there were recent rumors on TikTok that an HBO Max documentary on Bama Rush was covertly being made. On Tuesday, HBO Max announced the new documentary, in association with Vice; a Vice rep told the New York Times last week that concealed microphones were not used in the process.

We reached out to Sikes via email.