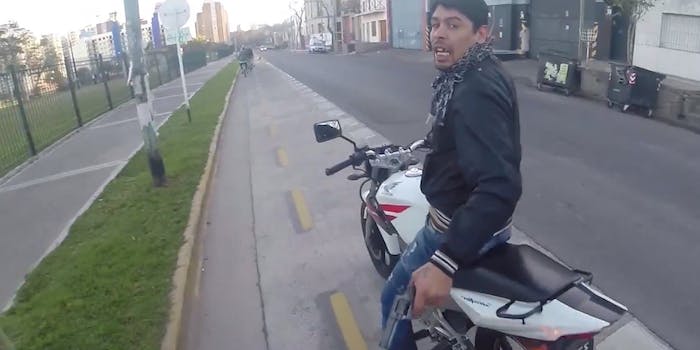 Alexander Hennessey is a prime example of our ever-more connected, digitized world: When he says he was the victim of a dramatic attempted robbery at gunpoint on the streets of Buenos Aires, there’s no need to just take his word for it—the whole thing was captured on a GoPro camera.

“I was on a bike tour in a rough part of Buenos Aires (Argentina) in broad daylight,” the description to his video on YouTube reads, “when a thief attempted to steal my camera gear at gunpoint. I miraculously happened to be recording with a gopro on my forehead and captured this amazing piece of footage!!”

Hennessey managed to sprint to safety, and credited the language barrier with helping save him. “He didn’t know how to communicate with me,” the traveler wrote in a Reddit thread discussing the video.

The footage is more than just a curiosity: It was subsequently sent to the Argentinian police, and “the robber was arrested later that day,” the Facebook page for Global Degree—a traveling-themed online show Hennessey features in—confirmed.

As for Hennessey, the experience did shake him up somewhat. “Whenever I heard [a motorbike] approaching I could feel a stress crawl up my back,” he wrote. But nonetheless, it didn’t put a dampener on the rest of his holiday. The remaining trip was “amazing,” he wrote. “I played a game of polo and watched Tango. I did wine tours in Mendoza and went to Iguazu Falls! Loved it.”

While viral-friendly GoPro’s are more commonly associated with taking selfies in volcanos or for being strapped to cows, this isn’t the first time they’ve captured darker footage. In May 2014, South African Malcolm Fox inadvertently recorded his own similar experience of being robbed at gunpoint—although unlike Alexander Hennessey, the robber successfully made off with his bike.

Earlier this month, meanwhile, a dirt biker caught on camera a “crazy old dude” in a truck trying (and failing) to run him over.