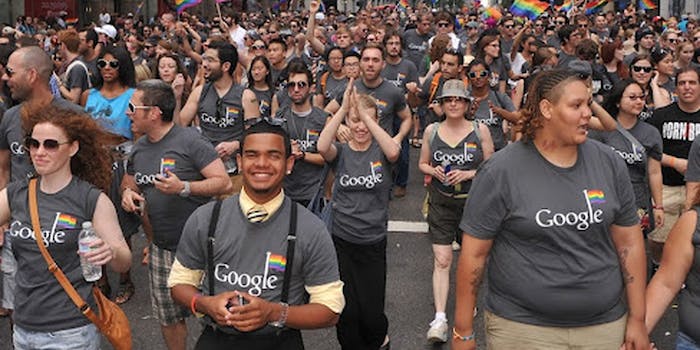 Google's "Legalize Love" initiative is aimed at decriminalizing homosexuality and recognizing same-sex partnerships in every country where the company has an office.

Google’s multicolored logo is taking on a new meaning as the Internet giant will announce a new campaign promoting gay rights.

The campaign, called “Legalize Love,” is aimed at ending gay inequality and discrimination in the countries that criminalize homosexuality. The project is slated to be announced at a Lesbian, Gay, Bisexual and Transexual conference in London on Monday.

“’Legalize Love’ is a campaign to promote safer conditions for gay and lesbian people inside and outside the office in countries with anti-gay laws on the books,” said a Google spokesperson to MSNBC.com.

Google also launched a special webpage on the company’s diversity, proclaiming that they encourage people to bring their “whole” selves to work and are committed to providing a pro-LGBT workplace.

But, Google did not explicitly come out in support of legalizing same-sex marriage worldwide, as many sites are reporting. Rather, “Legalize Love” is aimed at decriminalizing homosexuality in countries where it’s illegal and where Google has offices, including Singapore. The plan is to eventually have the campaign in every Google office.

Google has been a long-time supporter of LGBT rights. In 2008, Google cofounder Sergey Brin came out against California’s Proposition 8 ban on same-sex marriage. The company also offers same-sex benefits and always has a large showing at pride parades across the world.