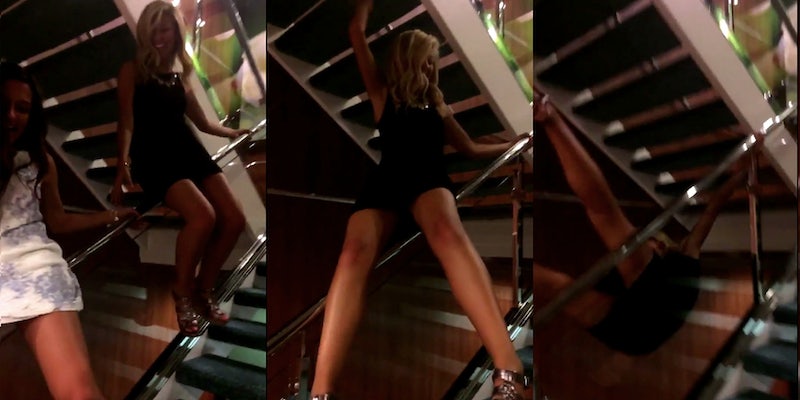 “Don’t fall, don’t fall off. Annie don’t fall!” the 17-year-old’s friend Maddie exclaims right as she plummets into the abyss.

“I did a backflip and landed on the railing below me. I got up and we went dancing afterward,” Schwenker told the Daily Dot. The girls were on their way from the cruise nightclub to the restroom when they decided to slide down the railing. (Schwenker notes that she was sober and just having some fun.) And while the fall looks pretty bad, Schwenker walked away with just a broken rib and had a bloody lip.

Although the video is from two months ago, when the girls and their families were on vacation, Schwenker’s friend Maddie posted the video to Twitter on Saturday. Since then, it’s made the rounds through Facebook and Tumblr, racking up a ton of views on both social networks.

Schwenker’s mother isn’t too happy about the viral attention. “She’s like, ‘You need to go to college, everyone’s going to think you were drunk,'” the teen said about her mom’s reaction. “She told me I could have broken my neck, and she was probably right.”

People have already done remixes of the video, adding their own witty captions or creating dubsmashes.

As for what Schwenker has learned from the experience?