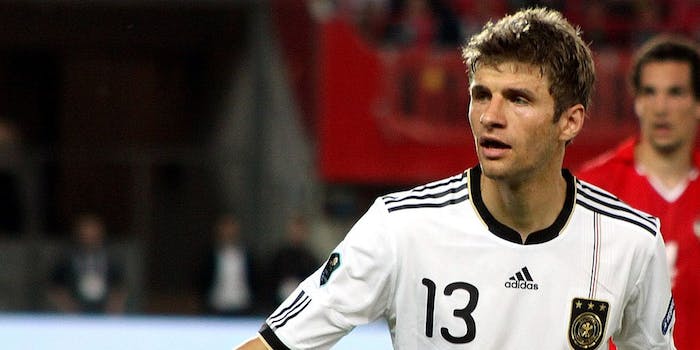 Germany used software that captured 5,000 data points per second and employed eight high-definition panoramic cameras to evaluate its players and opponents during its World Cup-winning run in Brazil.

This competitive edge, called SAP Match Insights, was developed by SAP HANA (short for High-Performance Analytic Appliance) in conjunction with the German national team. At its core, it isolates “key performance indicators” that aim to speed up the game and create more scoring opportunities. The data concluded that German players were prone to draining possession, and it slowed their ability to spark play: During the 2010 World Cup, players held the ball an average of 3.4 seconds per touch, and in Brazil they’d shaved that down to 1.1 seconds.

Germany scored 18 goals during the World Cup, and gave up only four.

According to SAP’s interview with The Register, Germany set two requirements for this system:

… one, the software had to run on site at the squad’s HQ, as the data was considered so valuable it wasn’t allowed off premises – so, no Cloud. Instead, they ran a Hana server at the German team compound in Brazil on their own hardware.

The World Cup, for all its thrills and attacking flurries of goals, will be remembered for its sharp turn forward into the 21st Century. Mighty Brazil, with its legacy of suffocating talent, was shred to pieces by elite engineering in the tournament’s most memorable game. Germany became the first European team to win the World Cup in the Americas, and in doing so ushered in an era of hyper-technical preparedness as a baseline must for all future contenders.