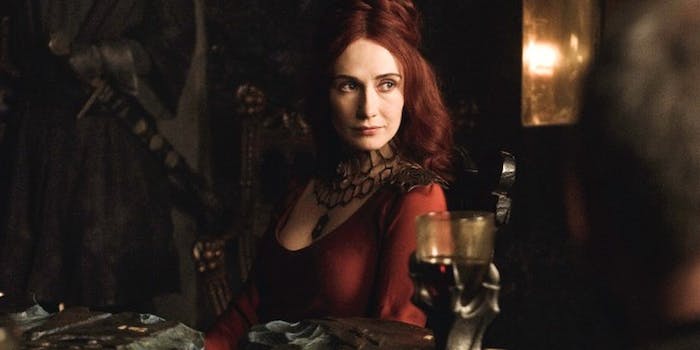 Teen flips out over Melisandre’s boobs on ‘Game of Thrones’

Game of Thrones is full of highbrow political philosophy, astonishing cinematography, and top-tier performances. Luckily for the hormonal teenagers whose parents have an HBO Go account, the show is also filled with boobs.

The kid in this video literally jumps for joy when Melisandre, the Red Woman, played by Dutch actress Carice van Houten, disrobes. He’s so excited, he can’t help but yelp something the New York Times would call wildly unprintable. It’s a fitting tribute to the Lord of Light.

News blog HyperVocal first uncovered the video. I tweeted it at van Houten, who (OMG!) actually responded, and hilariously so:

Whenever people or photo-sharing apps or the MPAA throw a fit over breasts, please copy van Houten’s response to my tweet and flood the Internet with it. The world will be a better place.