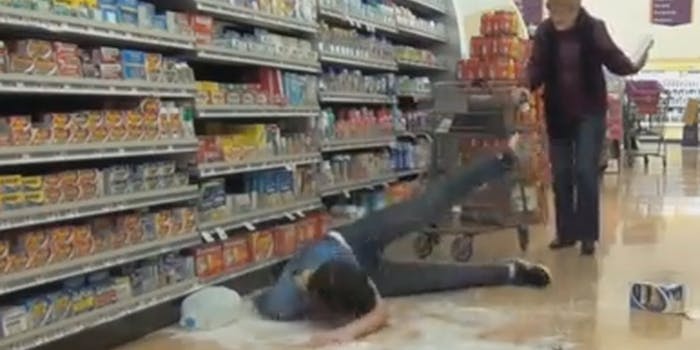 Three Virginia teens who started a YouTube craze when they filmed themselves smashing gallon-sized jugs of milk at a grocery store have been charged with destruction of property and disorderly conduct.

Just as all good things must eventually come to an end, all pain-in-the-ass kids who cruise into grocery stores with the sole intention of filming themselves smashing gallon-sized jugs of milk onto aisle floors must eventually be charged with seven counts each of misdemeanor destruction of property and disorderly conduct.

That’s the moral of the story surrounding Fairfax, Va., freedom fighters Omar, Zayd, and Faysal Khatib, two brothers and a cousin who took the Internet by storm last month when their “Gallon Smash Prank!” video went gangbusters to the tune of 3 million views on YouTube.

The video was taken offline shortly after that rush—the above clip is a mirror copy—but not before the three Khatibs had inspired a string of likeminded videos and started to feel altogether apologetic about their antics.

On Friday, news emerged that police in northern Virginia had tracked the teens down and were planning to charge them with seven counts each of misdemeanor destruction of property and disorderly conduct.

Those arrests haven’t been made yet, but NoVa’s Fox 5 reports that the boys will all be charged as juveniles. Which is appropriate, because this is a pretty juvenile act in its own right.