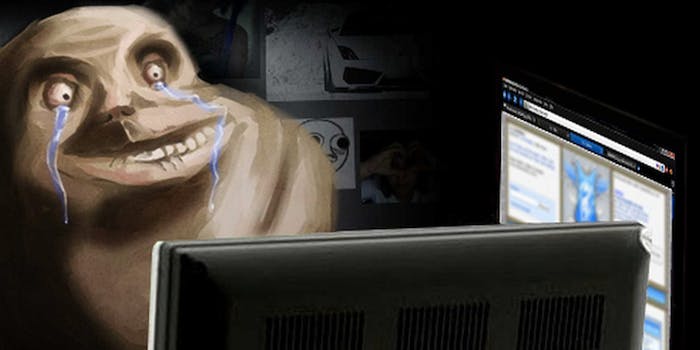 It’s the 5-year anniversary of ‘Forever Alone’—so, are you still alone?

On the Internet, five years is forever.

It was five years ago today that a FunnyJunk user with the handle Azuul uploaded a Rage Comic that culminated with a grotesque visage which became known, at the precise moment it appeared, as the “Forever Alone” face. The world of Internet memes was forever changed.

This singular image effortlessly conveyed the fear—nay, the crushing certainty—that no one will ever care about or love you in any meaningful way. Digital curators redeployed it in thousands of remixes and permutations, but they rarely strayed from the defining concept. Especially on the Web, where everyone is an agoraphobic loser pariah, the bleak truth of emotional isolation without end simply had to be distilled this way. It was a useful shorthand.

Except, as I mentioned, the “Forever Alone” meme is now a half-decade old. Surely some of us have met and fallen romantically for other people in that time, or made a new friend, or joined a support group since then. Right? Or are we all still drifting through the void? Speak up, anyone with a boyfriend or girlfriend or whatever. You can’t all still be alone. Can you?

Come on, do you even know how long “forever” is? You’re not exactly going to live that long. (Though I guess when you’re dead, you’re technically alone, so scratch that.) I just find it hard to believe that in a world where it seems hookups, parties, marriages, and country clubs are so popular, there can be so many long-distance loners. The numbers really don’t make sense.

I guess I could argue that, in hanging out on Twitter or Reddit or whatever all day, you’re actually part of a bustling community—not so much “alone” as “hyperconnected.” But you’ll just retort that cyberspace isn’t the same thing as an intimate dinner, or gazing up at the stars with a lover. And it’s not. I’m sorry you haven’t found a deep personal connection with anyone—truly, I am. I’m sorry for bringing it up.

Also, do you want to go out sometime?

Photo via Eurritimia/Flickr (CC BY 2.0)