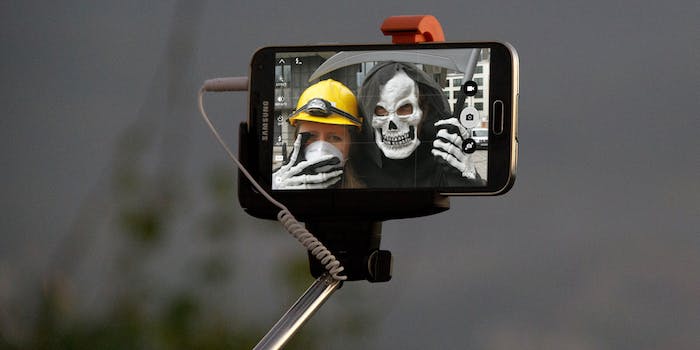 The terrifying final photos of people who died taking selfies

Selfies, as the old adage goes, are more dangerous than sharks. They can be fatal in so many ways—the victims fall, drown, get hit by trains, and shoot themselves. Sometimes they didn’t even want to get in on the selfie at all.

But there’s a morbid question about these tragedies that you may never have asked yourself: How did that final selfie turn out? It stands to reason that these final photos may be, in the end, worth dying for.

But we’ll let you be the judge.

She didn’t stumble, but seconds after she snapped a selfie at the Grand Canyon, this woman mouthed off to a park ranger who shoved her in.

This dude was taking selfies while waiting for class to start—like any of us would. But he waited so long he eventually starved to death. RIP.

Shortly after this charming Snapchat filter selfie was taken, this young woman was mistakenly captured, taken to a dog shelter, and euthanized.

Sadly, this selfie-taker was wearing the wrong kind of clown makeup for that neighborhood and was viciously murdered by a rival clown gang.

Collided with another pilot in another plane doing the exact same thing.