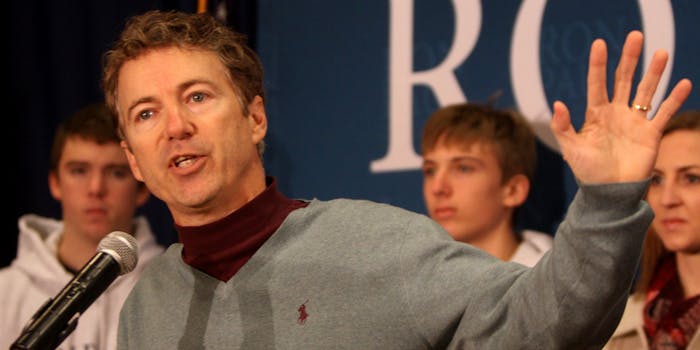 ‘Seinfeld’ writer to Rand Paul: Festivus is for the rest of us

Politicians have a long history of co-opting pop culture references, but for some, this went too far.

For those of you who have spent the last 15 holiday seasons following popular culture’s unexpected-yet-unwavering devotion to Festivus, the Seinfeld-born holiday “for the rest of us,” you are likely already aware that something terrible has happened: Rand Paul, the Tea Party senator and bizarro Ron Paul, has been sullying the holiday’s good name on Twitter.

Thankfully, one of Seinfeld’s writers, Dan O’Keefe, whose father invented Festivus, spoke out on CNN this week. “When Rand Paul tries to seem relevant with 15-year-old pop cultural references, it reminds me of when Bob Hope used to dress up as the Fonz, but that’s just me,” O’Keefe said.”

And what followed was rants about the Senate, DC parking, Obamacare, the NSA, and everything in between. It’s not that Rand wasn’t without a few decent points:

The NSA. I need more than 140 characters for this grievance.

And one actually followed the Festivus, Airing of Grievances, spirit set out by Frank Costanza so many years ago:

My Dad auctioned off this car instead of giving it to me. https://t.co/WcJKiJbAcf pic.twitter.com/sArpHLKmhW

Most of the rants, however, are politically charged. And D.C. rhetoric has no place in Festivus, a holiday about getting mad at your family, not your colleagues across the aisle.

Politicians have a long history of co-opting pop culture references, but for some, this went too far. Festivus is too good a holiday to be rendered dead and gone with political rhetoric. No popularly loved notion could survive such D.C. dressing, even by a guy ranting about D.C.