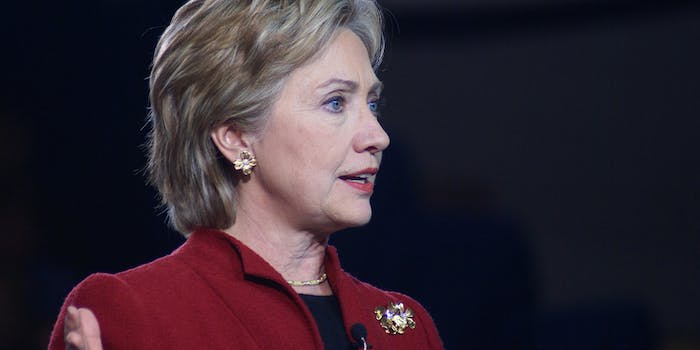 A Dallas-based CEO, Cheryl Rios, plans to move to Canada if Hillary Clinton is elected president. But it’s not because of Clinton’s views on, say, taxation or same-sex marriage—it’s because Rios does not believe that a woman can or should be president at all.

Noting that women have “different hormones” than men, Rios wrote on her Facebook page, “In the world we live in, we have equal rights … and I support all of that. I don’t support a woman being president.” She later added that she is a Christian and that she does believe that women can be doctors, lawyers, and CEOs. Just not presidents.

Why not presidents? Maybe because, as Rios wrote, “with the hormones we have there is no way we should be able to start a war.” But “a good, strong, honorable man” would be able to perform that role.

It’s hard to know just how rare Rios’ views are these days: a 2012 Gallup poll showed that 95 percent of Americans would vote for a “generally well-qualified” female presidential candidate from their own party, but Rios doesn’t exactly sound like a card-carrying Democrat. Perhaps if her party of choice ran a generally well-qualified woman for president, Rios would find that her concerns about hormones suddenly vanish.

Here’s what’s clearer, though: This story would probably never have made headlines on Jezebel, Salon, Raw Story, and other prominent online outlets had a similarly unknown man said it.

It’s hard to know just how rare Rios’ views are these days.

Actually, there’s a long tradition of women using their own platforms (and privilege) to tell other women not to even bother. Phyllis Schlafly, a conservative activist whose long list of achievements includes preventing the ratification of the Equal Rights Amendment and opposing the criminalization of marital rape, has spent decades telling women to stay at home and support their husbands’ careers instead of having their own.

Dr. Laura Schlessinger, a conservative radio host, likewise uses her own substantial career to tell other women to give up theirs, a topic that she wrote a whole book about. It’s unclear how women like Schlafly and Schlessinger (say that five times fast) justify their own choices to themselves or to others. Maybe they think that some has to do the dirty work of telling women to stay home.

Admittedly, Rios’ views seem to be slightly less hypocritical. She’s not telling other women not to do what she does (i.e., run their own company), just not to try to lead the country. But still, this flies in the face of some of our expectations about women in positions of power—that they necessarily want to help other women get there, too.

I don’t think it’s terribly important what some random, not particularly influential person has to say about female presidents, but I do think that this story illustrates an important point: Sexism isn’t just something men do to women. It’s something we all do to each other.

There are all sorts of reasons women might buy into this sort of sexism. Without attempting to psychoanalyze Rios specifically—I know almost nothing about her, after all—I can name a few. Holding sexist beliefs can be a way for women to keep their relationships with men harmonious. It can be a way to avoid questioning one’s religious identity, which may be driving their sexist beliefs to some extent. It can be a way to avoid disappointment and failure: If women aren’t even mentally capable of being president (or being scientists or CEOs or science-fiction authors), why bother trying?

Cheryl Rios is a reminder that, while being a woman can certainly make it easier for someone to recognize sexism in everyday life, it doesn’t give them a magical insight into how things like hormones work. Can Rios explain what it is about women’s hormones (whichever those are) make them unqualified to start a war? (Why do we need a president who will start wars, anyway?) Probably not. Even the researchers who study hormonal sex differences haven’t come to many firm conclusions about how estrogen and testosterone levels influence human behavior, and I doubt Rios could be that far ahead of them.

Conservative men love women like Rios because they say the things that men would never get away with saying, and because they get to pressure progressive women into supporting them for the sake of some sort of sisterhood. But don’t fall for it: We should support politicians and pundits based on their opinions, not on their gender. On the subject, the New Republic‘s Elizabeth Stoker Bruenig writes:

It is a rather anti-feminist position to insist that feminists (or anyone, really) take it easy on conservative women just because they’re women. The feminist attitude requires us to take candidates and public intellectuals seriously based on the merit of their ideas, regardless of whether they are men or women. … By criticizing women intellectuals and politicians whose ideas are opposed to feminist politics, we’re showing them respect: We’re taking them seriously enough to reject them. Women aren’t harmless, and recognizing that means acknowledging that women politicians can do all the damage men can do.

This story is also a great example of the limits of Lean In-style feminism. Women like Rios, Schlafly, and Schlessinger may individually achieve lots of power and success, but they don’t necessarily do anything to help all the women following in their footsteps. In fact, they may actively discourage them from doing so.

And while these three are probably a lost cause, I hold out hope—naively, some of my fellow progressives might claim—that a Clinton presidency would actually change things for women on a structural level, not just for Hillary herself.