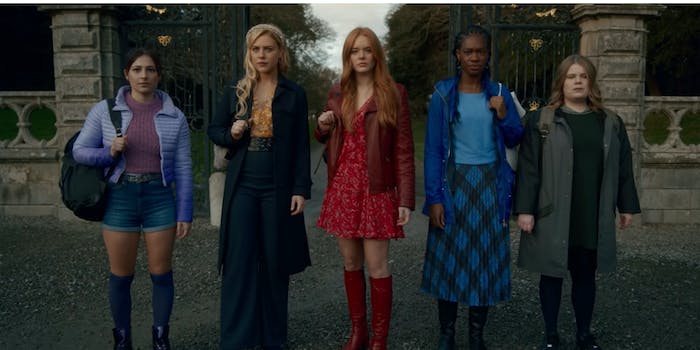 Netflix made some choices for its live-action reboot of the animated series.

Netflix released the first trailer for its upcoming adaptation of Winx Club, and fans are not happy about the casting choices.

Fate: The Winx Saga is a live-action reboot of the aughts animated series Winx Club, which followed a group of fairy warriors honing their powers at Alfea College. The series initially aired in Italy, before being picked up by Nickelodeon.

But fans on Twitter noticed some differences in the main cast. “Not netflix whitewashing the asian and latina characters of their live action Winx Club,” said thepaperreels, comparing the animated characters with Netflix’s. Specifically, fans alleged whitewashing in regards to characters Musa and Flora.

Netflix was also criticized for changing the name of fan-favorite Flora, not including original character Tecna, and watering down the fashion to fit a gloomier Riverdale or The Chilling Adventures of Sabrina aesthetic.

Netflix has a history of criticism around the whitewashing of its adaptations, original titles, and even its promotion of series. Winx Club creator Iginio Straffi’s inspiration for Flora was reportedly Jennifer Lopez, and Musa’s was Lucy Liu. But he said in 2019 that the audience for the Netflix series would be “much older” than Winx Club and the content “edgier and darker.”

Straffi is listed as executive producer and writer of Fate: The Winx Saga, along with The Vampire Diaries’ Brian Young. The series debuts on Jan. 22.