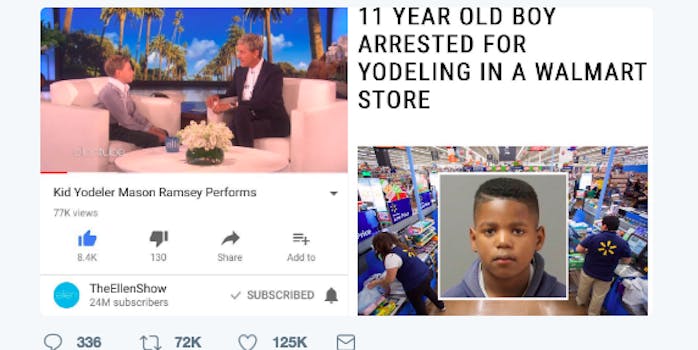 Pay no attention to the viral tweet saying otherwise.

As soon as Mason Ramsey—colloquially known as the “yodeling Walmart kid”—went viral for his brilliant yodeling rendition of Hank Williams’ “Lovesick Blues,” it seemed like only a matter of time until unsavory details got out about his personal life. Remarkably, that hasn’t happened yet, but a satirical news site recently got into a race-based snafu with a story playing off Ramsey’s viral success.

The website, Huzlers, shared a screenshot of a story that claimed an 11-year-old Black boy was arrested for yodeling in a Walmart. That didn’t actually happen, but the kid in the photo did get in some serious trouble a few years ago. The photo is actually the mugshot of Jarrell Milton, who was arrested for his involvement in a homicide in Omaha, Nebraska, in October 2015.

Milton wasn’t arrested but instead given probation and sent to Boys Town, a treatment facility in Nebraska that works with young people with behavioral problems.

But none of these facts stopped Twitter user @StarryToronto from sharing the fake screenshot alongside a screenshot of Mason Ramsey performing on The Ellen Show with the caption, “Yodeling while White Vs Yodeling while Black.”

The tweet has amassed more than 124,000 likes and 71,000 retweets in just two days, and plenty of people added their own outraged responses. @StarryToronto wrote several follow-ups to clarify that his initial tweet was a joke. He even started a poll with the caption, “HAVE YOU EVER SEEN A BLACK PERSON YODELING BEFORE?” Nearly 40,000 people voted, with 92 percent leaning toward “no.”