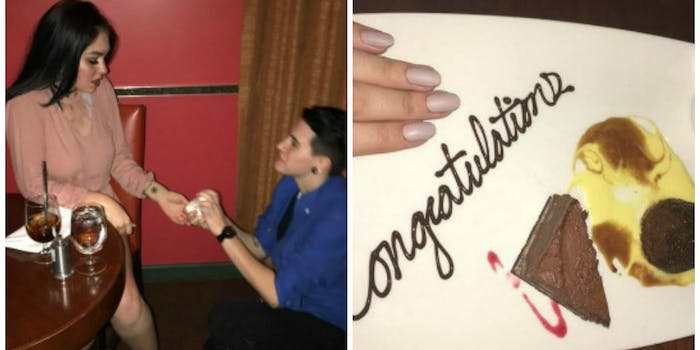 Sometimes, you need a free dessert after a long, tough week. And if the only way to get that free dessert is to fake a marriage proposal, despite the fact neither the proposal-giver nor the proposal-receiver are old enough to celebrate the fake proposal acceptance with a glass of champagne, then that’s what you have to do.

Consider this couple (though they’re not really a couple) as your heroes of the day. That’s 19-year-old Cati Domitrovich with her best friend, 17-year-old Alex Nagle. After a rough week, the duo decided on a post-dinner dessert. But they didn’t want to pay for it.

So, they came up with an idea.

we faked a proposal just to get free dessert pic.twitter.com/T58jHVVBur

And it worked. They got their free dessert, and then, they went viral.

Domitrovich told BuzzFeed they had to act like a couple during the dinner, and when she went to the bathroom, Nagle gave a heads-up to their waiter that he was going to propose and to get the camera ready.

“Everyone believed us and everyone clapped,” Domitrovich said.

After facing some apparent criticism, Domitrovich further explained herself on Twitter.

1. y'all are aware we aren't broke
2. we did it for the memory
3. we paid for a full dinner ourselves
4. quit being so hurt over a tweet

Domitrovich said she and Nagle might try the idea again, though she worries about being recognized the next time they attempt the stunt. Or, maybe they’ll find something even better—like true love.

Society would tell us there’s no such thing as a free lunch. But free dessert is a different story, particularly if you have a fictional romantic story to tell.