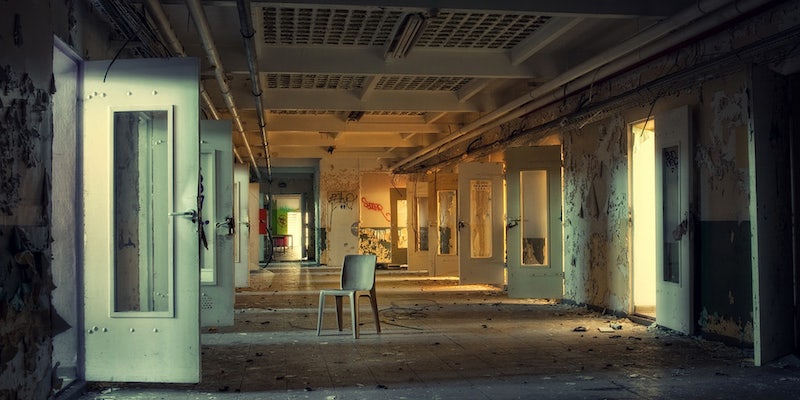 In prison, Facebook isn't just a time-killing luxury. It's a means of survival.

As the Internet becomes an inescapable part of our daily lives, it becomes increasingly harder to imagine life without it. For the hundreds of thousands of convicts released from prison every year, though, this is an ongoing struggle—as the astonishing pace of technology can make the adjustment back to civilian life all that more difficult. Considering how far online video has come in the last ten years,someone who’s been in prison for any extended period of time now has the full thrust of the 21st century forced upon them, as if the future truly is now.

This lack of technology in prisons unfairly denies inmates basic life skills—creating yet another barrier to exiting the system by encouraging recidivism.

As a recent Newsweek report points out, the majority of prisoners are still relying on older forms of communication like snail mail to keep up with the outside world, as only four states “permitted some Internet access to inmates, though in all cases it was limited.” Newsweek’s Max Kutner continues, “In Kansas, only minimum-security inmates had access. In Louisiana, the Internet was only available to inmates within 45 days of release and for the purpose of job searches.” This lack of technology in prisons unfairly denies inmates basic life skills—creating yet another barrier to exiting the system by encouraging recidivism.

While Kansas, Louisiana, Hawaii, and Connecticut are experimenting with restricted online access, when will we finally define Internet access as a basic human necessity, one on par with food, water, and medicine?

There’s a solid case to be made for letting convicts have more exposure to the Internet. Denying them this resource not only preempts any chance for rehabilitation to the free world, but also denies them a voice in a worldwide conversation that seems largely ready to forget they exist. As Michael Santos—who finished a 25-year prison sentence in 2012—wrote for the  Daily Dot, “Since the system takes up such an enormous amount of taxpayer resources, taxpayers should have access to firsthand, real-time information about prison and prison life.”

As an example, Santos tells the story of a gang of prison guards he and other inmates witnessed brutally abuse prisoners. Abuse of power by prison guards is a massively underreported issue, one that concerns 2.2 million incarcerated persons, and in fact, half of the sexual abuse claims in American prisons were levied against the prison guards meant to prevent such behavior. In Florida, where Santos served his sentence, investigators are trying to uncover how 364 persons died behind bars, the highest number for any state ever.

Such an investigation might not even be necessary if prisoners were allowed basic access to modern technology. If “the Internet as liberator” storyline sounds familiar, it was largely used to discuss the connection between social media and freedom from abuse by dictatorships. The role Twitter and Facebook have played in giving voice to the voiceless was a well-documented aspect of the Arab Spring and has even reached the streets of Manhattan and Ferguson, Mo., which protesters took the streets to remind us that #BlackLivesMatter.

This isn’t about making prison cushy for prisoners—it’s about securing a fundamental human right for those most in need of it.

Whether prisoners should be trusted with the same power to report abuse as the civilian population is obviously a major concern. The email system to which federal prisoners are given access, dubbed TRULINCS, is largely a digital equivalent to prison mailing systems: Messages through TRULINCS are text-only and subject to search by prison guards.

While those might seem like understandable precautions, it’s worth considering how prisoners use the illicit Internet access they do get through the 3,000 cell phones that have been confiscated since 2012. As part of their incredible Tech Behind Bars series, Fusion poured over hundreds of social media accounts actively managed by prisoners on such devices, the most interesting of all being AcieBandage, a Vine account kept by an anonymous inmate. Like AcieBandage, most prisoner activity is innocuous and meant to give a snapshot of prison life or the prisoner themselves. According to a 2012 report from California, however, prison officials warned of the threat of sex offenders and gang activity to justify the hefty fines and strict enforcement against prisoner-owned cell phones.

Prisoners, however, do have freedom of speech—and isn’t access to the Internet an integral part of modern speech? By restricting convicts from even a censored version of the digital world, we’re denying them not just the ability to survive in a culture that has grown without them but also the ability to contend with life in prison. This isn’t about making prison cushy for prisoners—it’s about securing a fundamental human right for those most in need of it.

Whether the Internet itself is a fundamental human right is largely a settled topic: A 2011 U.N. report said as much, as have several major polls from the BBC and the Internet Society. Whether that right should extend to prisoners should settle not on the effectiveness of prison as punishment but on the public good it could generate for society.

One of the reasons for America’s massive prison population is the “revolving door” aspect of prison life. Within three years after their release, over two thirds of prisoners will find themselves back in prison. One of the chief causes of this recidivism is a lack of job training and employable skills amongst the ex-convict population. While those of us in society learn how to handle computers and the Internet in our daily lives, prisoners are completely blocked from doing the same, making them less employable and, therefore, more likely to wind up back in prison.

Within three years after their release, over two thirds of prisoners will find themselves back in prison.

Thus, we are not only denying 2.2 million people a fundamental facet of American life in 2015 but also making it more likely they’ll commit more crimes upon release. Like many aspects of American prisons—from few protections against abuse to the barbarism of solitary confinement—denying inmates Internet access leads to a system not only more degrading for prisoners but worse for society as a whole.

The War on Drugs and racism in the judicial system have led to overpopulated prisons in the United States, so much so that our incarcerated population accounts for over one quarter of all prisoners in the world. With numbers that significant, this issue is a major humanitarian crisis that deserves our attention. Continuing to ignore this reality is akin denying prisoners education or the ability to communicate with family. While prison should retain it’s role in society as a form of punishment for those who have broken the law, it’s cruel and unusual to continue to punish them along after they’ve left the prison walls.

And as the evidence shows, it’s hurting us just as much as it hurts them.