Esquire.com commits the 9/11 gaffe of the day

Here's something the men's magazine can't wait to forget.

There’s a good chance a classic 9/11 essay crossed your transom at some point this morning: “The Falling Man,” which takes as its starting point a photograph of a man plummeting to his death from one of the World Trade Center towers, first appeared in Esquire in 2003 and has cropped up on every anniversary of the attack since. Today, though, the infamous photo appeared in a slightly more offensive context.

Eagle-eyed Atlantic Wire writer Alex Abad-Santos spotted the unfortunate mistake, which was swiftly corrected, but not before the damage was done:

@MilesKlee It’s been removed, but it was running on the right rail of their Falling Man feature. pic.twitter.com/JNKf2D6na7

We reached out to Esquire about the issue, and apparently so did plenty of other people, as the magazine’s Twitter account issued a brusque semi-apology that enraged readers even more than the initial “stupid technical glitch.”

Relax, everybody. There was a stupid technical glitch on our “Falling Man” story and it was fixed asap. We’re sorry for the confusion. 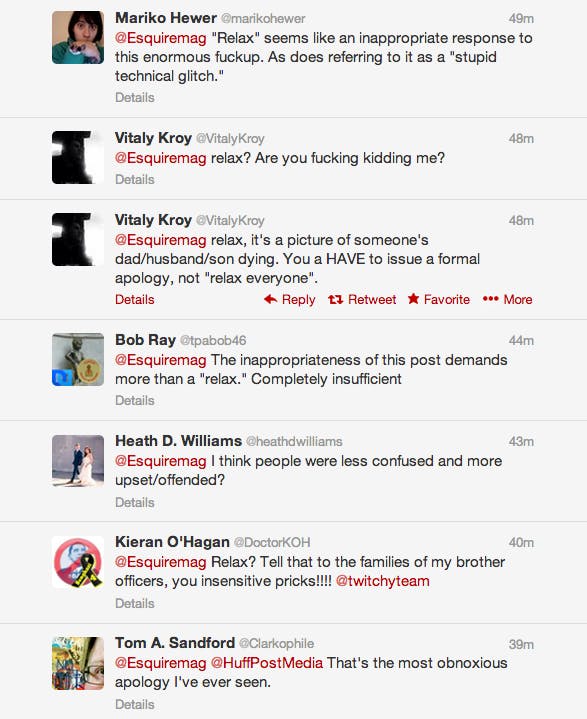 Talk about blowback. Here’s a lifehack for you: Never, ever tell Americans to “relax” about anything 9/11-related, especially on the Internet. It’s just not going to happen.