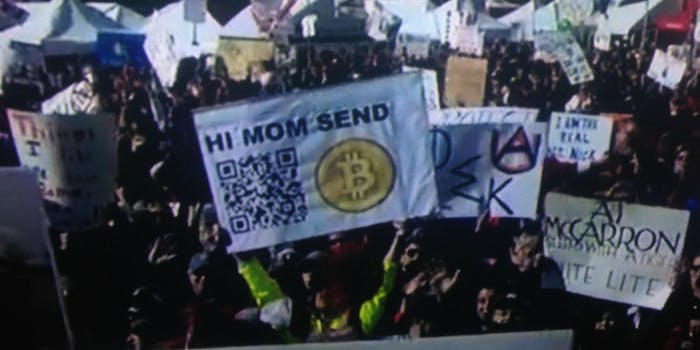 ESPN’s College Gameday was at Auburn University on Saturday for the Iron Bowl, the annual football face-off between the Auburn Tigers and the Alabama Crimson Tide.

But forget the game—the big winner was a college kid caught on camera holding a sign that said “Hi Mom, send Bitcoin.”

Fans of Bitcoin, the world’s most popular digital currency, spotted the sign on ESPN and loved it. And, thanks to the sign’s scannable QR code, they were able to find the student’s Bitcoin address and start sending him money.

The clever sign-holder has only been identified by his Reddit username, BitcoinPitcher2. On Reddit, he wrote that he never expected such a huge response, and wasn’t sure his QR code would even scan on TV.

Bitcoin has been on a massive upswing over the past week, crossing the $1,000 threshold for the first time in its history.